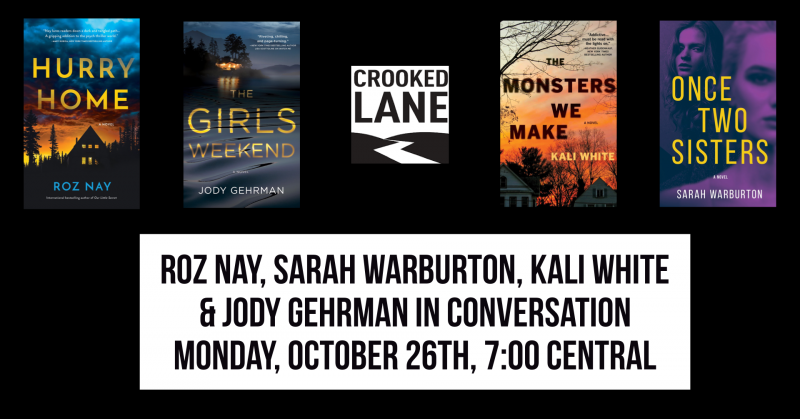 Roz Nay is the bestselling author of Hurry Home and Our Little Secret, which won the Douglas Kennedy Prize for best foreign thriller in France and was nominated for the Kobo Emerging Writer Prize for Mystery and the Arthur Ellis Best First Novel Award. Roz has lived and worked in Africa, Australia, the US, and the UK. She now lives in British Columbia, Canada, with her husband and two children. www.RozNay.com

Jody Gehrman has authored twelve published novels and numerous plays for stage and screen. Her latest psychological suspense novel, The Girls Weekend, was published by Crooked Lane Books in summer 2020. Her debut suspense novel, Watch Me, was published by St. Martin's Press. Her Young Adult novel, Babe in Boyland, won the International Reading Association’s Teen Choice Award and was optioned by the Disney Channel. Jody’s plays have been produced or had staged readings in Ashland, New York, San Francisco, Chicago and L.A. Her play Wild Fire was performed at the Kennedy Center American College Theatre Festival in 2020. Tribal Life in America won the Ebell Playwrights Prize and received a staged reading at the historic Ebell Theater in Los Angeles. She and her partner David Wolf won the New Generation Playwrights Award for their one-act, Jake Savage, Jungle P.I. She holds a Master’s Degree in Professional Writing from the University of Southern California and is a professor of Communications at Mendocino College in Northern California. www.jodygehrman.com

Kali White is the author of the novels The Monsters We Make, The Good Divide and The Space Between, as well as short stories, essays, and articles. She’s the recipient of an American Book Award, an Eric Hoffer Book Award, and an Independent Publisher’s silver medal for fiction. She’s a regular contributor to the A&E Network Real Crime blog series and serves as a volunteer for the PEN America Prison & Justice Writing program. Kali holds an MFA in creative writing from Vermont College of Fine Arts and is a faculty member of the Lindenwood University MFA Creative Writing Program. She lives in Iowa with her family. www.kaliwhite.com

Sarah Warburton is the author of the debut thriller, Once Two Sisters, published September 2020 by Crooked Lane Books and recommended by Publishers Weekly, PopSugar, and CrimeReads. After earning a B. A. in Latin from the College of William and Mary, an M.A. in Classics from the University of Georgia and another from Brown University, she studied creative writing at the University of New Mexico, at the Taos Writers Workshop, and in Houston with Justin Cronin. She spent ten years as lead writer for UpClose Magazine in Sugar Land. Her short story, "Margaret's Magnolia," appeared in the Southern Arts Journal and her Pushcart prize nominated story "Survival English" appeared in Oyster River Pages. She lives in the mountains of Southwest Virginia with her family. www.sarahwarburtonauthor.com

Once Two Sisters: A Novel (Hardcover)

Perfect for fans of Alafair Burke and Megan Collins, Sarah Warburton's debut novel that explores the dangerous bond between sisters.

When her sister goes missing, Zoe assumes it's just another one of her estranged sibling's stunts--but the danger is all too real.

From the bestselling author of Our Little Secret comes a “twisty, gripping” psychological thriller “with heart” set in the Rocky Mountains (Kaira Rouda, author of The Favorite Daughter)

The Monsters We Make: A Novel (Hardcover)

For fans of Rene Denfeld and Shari Lapena comes a rich, atmospheric family drama set in the 1980's following the disappearances of two paperboys from a small midwestern town.

It's August 1984, and paperboy Christopher Stewart has gone missing.

The Girls Weekend: A Novel (Hardcover)

For fans of Ruth Ware and Lucy Foley, a riveting locked-room mystery about five college friends eager to reunite after years apart--only to be ripped apart again when their host's disappearance unearths dark secrets and old grudges.