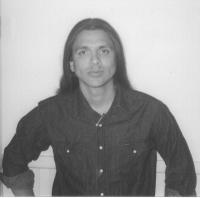 Stephen Graham Jones is the author of thirteen novels, four collections, and two novellas. He does horror and literary, thriller and science fiction. Most recent are The Least of My Scars, Zombie Sharks with Metal Teeth, and Flushboy. Stephen's had some hundred and seventy stories published, from Alaska Quarterly Review to Weird Tales, from Asimov's to Prairie Schooner. His stories have been picked up for the The Year's Best Fantasy and Horror, The Best Horror of the Year volumes 2 and 3, The Year's Best Dark Fantasy and Horror (2010, 2011, and 2012), and Dzanc's Best of the Web 2010. He's also been in a lot of anthologies (The Weird, Creature, Zombies, Heroics, Ghosts, more) and some textbooks (Writing Fiction, Behind the Short Story, Architectures of Possibility). Stephen's books have been finalists for the Bram Stoker Award, three Shirley Jackson Awards, the Colorado Book Award, and he's won the Texas Institute of Letters Award for Fiction, the This is Horror "Novel of the Year," the Independent Publisher's Award for Multicultural Fiction, and he's been an NEA fellow in fiction. Stephen earned his Ph.D. from Florida State University. He lives in Boulder, Colorado.

NAMED ONE OF THE BEST BOOKS OF 2016 BY TOR.COM AND BOOK RIOT