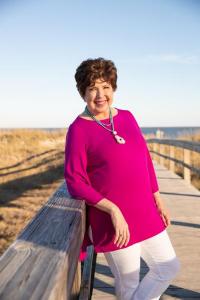 She also wrote ten critically acclaimed mysteries, including the Callahan Garrity mystery series, under her real name, Kathy Hogan Trocheck. Her mysteries have been nominated for the Edgar, Anthony, Agatha and Macavity Awards.

A native of St. Petersburg, Florida (and a diplomate of the Maas Bros. Department Store School of Charm), Trocheck earned a B.A. in journalism from the University of Georgia in 1976 (Go Dawgs!). She started her professional journalism career in Savannah, Georgia, where she covered the real-life murder trials which were the basis of Midnight in the Garden of Good and Evil. She left journalism after a ten-year stint as a reporter for The Atlanta Journal-Constitution.

As a lifelong “junker” the author claims to know the location of every promising thrift store, flea market and junkpile in the southeastern United States, plus many parts of Ohio.

Married to her high school sweetheart, she is the mother of two grown children and a proud grandmother. After a brief hiatus in Raleigh, NC, she and her husband moved back to their old neighborhood in Atlanta, where they live in a restored 1926 Craftsman bungalow. She divides her time between Atlanta and her restored beach cottage on Tybee Island, GA. 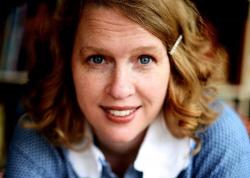 Katherine Center is the New York Times bestselling author of seven novels, including How to Walk Away, Happiness for Beginners, and The Bright Side of Disaster. Her fourth novel, The Lost Husband, is soon to be a movie. Katherine has been compared to both Nora Ephron and Jane Austen, and the Dallas Morning News calls her stories, "satisfying in the most soul-nourishing way." Katherine recently gave a TEDx talk on how stories teach us empathy, and her work has appeared in USA Today, InStyle,Redbook, People, The Atlantic, Real Simple, and others. Katherine lives in Houston with her husband and two sweet kids. Visit her online at katherinecenter.com.

Our signing policies can be found here

Pull up a lounge chair and have a cocktail at Sunset Beach – it comes with a twist.

How to Walk Away: A Novel (Hardcover)

From the author of Happiness for Beginners comes the instant New York Times bestseller (May 2018), an unforgettable love story about finding joy even in the darkest of circumstances.

An instant New York Times bestseller (May 2018) from the author of The Weekenders - a delightful new novel about new love, old secrets, and the kind of friendship that transcends generations.

The Beach House Cookbook is the perfect gift for creative chefs looking to expand their summer cuisine.

The Weekenders: A Novel (Paperback)

Tote bag, suitcase, backpack or duffle, it’s time to pack for a summer of intrigue…

Greer Hennessy is a struggling movie location scout. Her last location shoot ended in disaster when a film crew destroyed property on an avocado grove. And Greer ended up with the blame.

Save the Date: A Novel (Paperback)

Can this wedding be saved?

Take a splash of betrayal, add a few drops of outrage, give a good shake to proper behavior and take a big sip of a cocktail called…Ladies' Night!

“Fresh, confident, intelligent and amusing. Grab a cold drink, put your feet up, and enjoy yourself.”— Sue Grafton

“Mary Kay Andrews has perfect pitch when it comes to endearing, smart-mouth heroines, and she has caught the languid looniness of the Low Country perfectly.”
—Anne Rivers Siddons