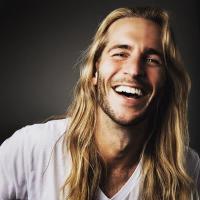 Jason Gallaher will drop by and signed copies of Whobert Whover, Owl Detective ($17.99).

Jason Gallaher is a children's book writer who fell in love with detective work while watching episodes of Blue's Clues. He solved the mystery of what to do when he grew up and became an author when he learned being a merman is impossible (at least for now). Jason lives in Austin, Texas, with his Pomeranian, Pom Brokaw, who is a super sleuth when it comes to finding treats. Visit Jason online at JasonGallaher.com.

This is just a stock signing, there will be no public event. To order inscribed copies, include the inscription information in the order comments when placing your order.

What happened to Perry the Possum? Whobert Whover, Owl Detective, is on the case!

Did Debbie the Duck whack Perry with her wicked wings?

Or did Freddie the Frog soak Perry in his sickening slime?

And what if the culprit is closer to home than Whobert expects?