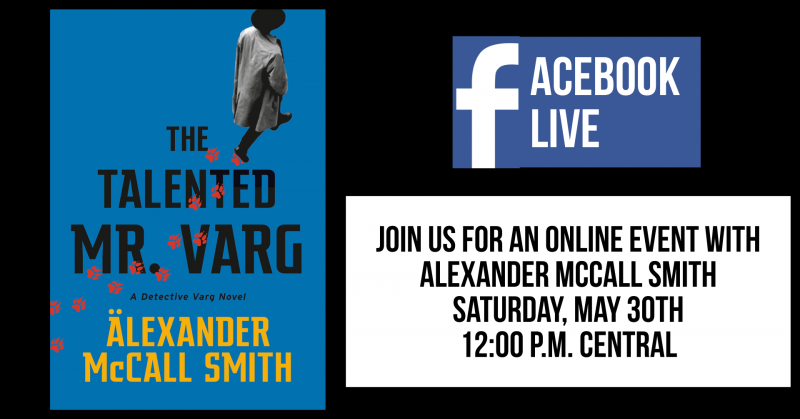 Alexander McCall Smith, often referred to as ‘Sandy’,  is one of the world’s most prolific and best-loved authors. For many years he was a professor of Medical Law and worked in universities in the UK and abroad before turning his hand to writing fiction. He has written and contributed to more than 100 books including specialist academic titles, short story collections, and a number of immensely popular children’s books. His first book, The White Hippo—a children’s book, was published by Hamish Hamilton in 1980.

But it wasn’t until the publication of the highly successful The No. 1 Ladies’ Detective Agency series that Alexander became a household name. The series has now sold over twenty million copies in the English language alone, and since the books took off, he has devoted his time to writing.

His various series of books have been translated into forty-six languages and become bestsellers throughout the world. These include the popular 44 Scotland Street novels, first published as a serial novel in the Scotsman newspaper and now the longest-running serial novel in the world; the Isabel Dalhousie novels, and the von Igelfeld series. He is also the author of the Corduroy Mansions series, which started life as an engaging cross-media serial written for the Telegraph online.

In addition to these series, Alexander has written a number of stand-alone novels, including The Forever Girl, Fatty O’Leary’s Dinner Party, My Italian Bulldozer, The Second Worst Restaurant in France, Chance Developments and Pianos and Flowers.

He has also authored many non-fiction titles, the latest of which are A Work of Beauty: Alexander McCall Smith’s Edinburgh and What W.H. Auden Can Do For You.

Recently Alexander has written a new children’s series—The School Ship Tobermory—and we now have four books in the series. This increases the number of children’s books he has written to more than thirty.

Alexander has received numerous awards for his writing and holds twelve honorary doctorates from universities in Europe and North America. In 2007 he received a CBE for services to literature and in 2011 was honoured by the President of Botswana for services through literature to the country. In 2015 he received the Bollinger Everyman Wodehouse Prize for Comic Fiction and in 2017 The National Arts Club of America—Medal of Honor for Achievement in Literature.

In the Swedish criminal justice system, certain cases are considered especially strange and difficult, in Malmö, the dedicated detectives who investigate these crimes are members of an elite squad known as the Sensitive Crimes Division.

These are their stories.

In the second installment in the best-selling Detective Varg series, Ulf and his team investigate a notorious philanderer—a wolf of a man whose bad reputation may be all bark and no bite.

In the latest book in the widely beloved No. 1 Ladies' Detective Agency series, Precious Ramotswe takes on a case for a childhood acquaintance and finds that family relationships are always a tricky proposition—even for Botswana's premier female detective.

In this delightful sequel to the best-selling comedic novel My Italian Bulldozer, Paul Stuart's travels take him to a French village, where the local restaurant's haute cuisine leaves a lot to be desired.

Fans around the world adore the bestselling No. 1 Ladies’ Detective Agency series and its proprietor, Precious Ramotswe, Botswana’s premier lady detective. In this charming series, Mma  Ramotswe—with help from her loyal associate, Grace Makutsi—navigates her cases and her personal life with wisdom, good humor, and the occasional cup of tea.