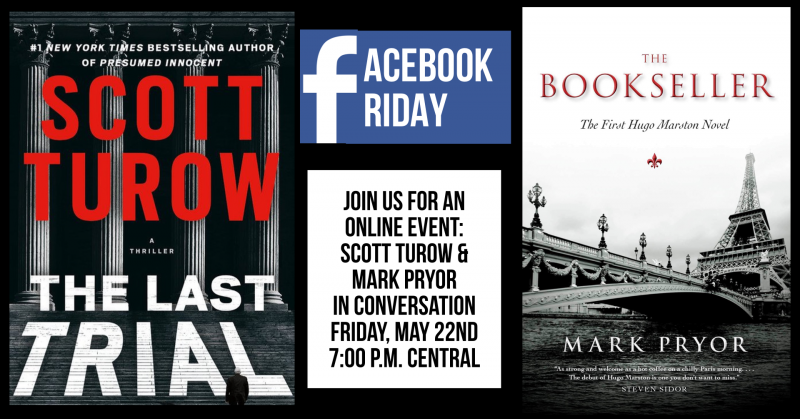 Scott Turow is the author of many bestselling works of fiction, including Testimony, Identical, Innocent, Presumed Innocent, and The Burden of Proof, and two nonfiction books, including One L, about his experience as a law student. His books have been translated into more than forty languages, sold more than thirty million copies worldwide, and have been adapted into movies and television projects. He has frequently contributed essays and op-ed pieces to publications such as the New York Times, Washington Post, Vanity Fair, The New Yorker, and The Atlantic.

Mark Pryor (Austin, TX) is the author of The Bookseller and The Crypt Thief, the first two Hugo Marston novels, and the true-crime book As She Lay Sleeping. An assistant district attorney with the Travis County District Attorney's Office, in Austin, Texas, he is the creator of the true-crime blog DAConfidential. He has appeared on CBS News's 48 Hours and Discovery Channel's Discovery ID: Cold Blood. Visit him online at www.markpryorbooks.com, www.facebook.com/pages/Mark-Pryor-Author, and http: //DAConfidential.com.

Two formidable men collide in this "first-class legal thriller" and New York Times bestseller from Scott Turow: a "brilliant courtroom chess match" about a celebrated criminal defense lawyer and the prosecution of his lifelong friend -- a doctor accused of murder (David Baldacci).