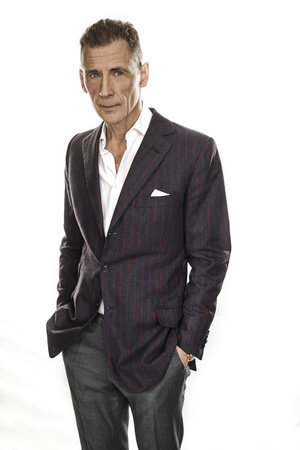 David Lagercrantz will sign and discuss The Girl Who Lived Twice (Knopf; $27.95).

David Lagercrantz  is an acclaimed Swedish author and journalist. In 2015 The Girl in the Spider's Web, his continuation of Stieg Larsson's Millennium Trilogy, became a worldwide best seller, and it was announced that Lagercrantz would write two further novels in the series. The Girl Who Takes an Eye for an Eye was published in September 2017. He is the coauthor of numerous biographies (including the internationally best-selling memoir I Am Zlatan Ibrahimovic) and the acclaimed novel Fall of Man in Wilmslow, on the death and life of Alan Turing.

The sixth Lisbeth Salander story in the Millennium Series--the crime-fiction phenomenon that has sold more than 90 million copies worldwide.

The Girl Who Takes an Eye for an Eye: A Lisbeth Salander novel, continuing Stieg Larsson's Millennium Series (Paperback)

Soon to be a major motion picture starring Claire Foy. Lisbeth Salander and Mikael Blomkvist return in this ripped-from-the-headlines, high-octane follow-up to Stieg Larsson's The Girl Who Kicked the Hornet's Nest.

One of the Best Books of the Year
NPR * USA Today * O, The Oprah Magazine * Esquire

Fall of Man in Wilmslow: A Novel of Alan Turing (Paperback)

From the author of the #1 best seller The Girl in the Spider’s Web—an electrifying thriller that begins with Alan Turing’s suicide and plunges into a post-war Britain of immeasurable repression, conformity and fear