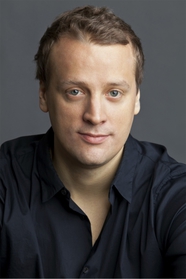 Charles Finch will sign and discuss The Vanishing Man (Minotaur; $26.99).

Charles Finch is the USA Today bestselling author of the Charles Lenox mysteries, including The Woman in the Water (February 2018). His first contemporary novel, The Last Enchantments, is also available from St. Martin's Press. Finch received the 2017 Nona Balakian Citation Award, for excellence in reviewing, from the National Book Critics Circle. His essays and criticism have appeared in the New York Times, Slate, Washington Post, and elsewhere. He lives in Los Angeles.

A chilling new mystery in the USA Today bestselling series by Charles Finch, The Woman in the Water takes readers back to Charles Lenox’s very first case and the ruthless serial killer who would set him on the course to become one of London’s most brilliant detectives.

It's London in 1876, and the whole city is abuzz with the enigmatic disappearance of a famous foreign pianist. Lenox has an eye on the matter - as a partner in a now thriving detective agency, he's a natural choice to investigate.

It's 1876, and Charles Lenox, once London's leading private investigator, has just given up his seat in Parliament after six years, primed to return to his first love, detection. With high hopes he and three colleagues start a new detective agency, the first of its kind.

In An Old Betrayal, the seventh book of Charles Finch's bestselling series of Victorian mysteries, a case of mistaken identity has Charles Lenox playing for his highest stakes yet: the safety of Queen Victoria herself.

A Death in the Small Hours: A Mystery (Charles Lenox Mysteries #6) (Paperback)

From Charles Finch, the critically acclaimed author of A Beautiful Blue Death and A Burial at Sea, comes A Death in the Small Hours--an intriguing new mystery in what The New York Times calls "a beguiling series"

A Burial at Sea: A Mystery (Charles Lenox Mysteries #5) (Paperback)

Charles Lenox, Member of Parliament, sets sail on a clandestine mission for the government. When an officer is savagely murdered, however, Lenox is drawn toward his old profession, determined to capture another killer.

A Stranger in Mayfair: A Mystery (Charles Lenox Mysteries #4) (Paperback)

In this enthralling mystery, detective Charles Lenox tries to resist the lure of a case and focus on his new career in Parliament.

In the small hours of the morning one fall day in 1866, a frantic widow visits detective Charles Lenox. Lady Annabelle's problem is simple: her beloved son, George, has vanished from his room at Oxford.

Charles Lenox jumps headlong into the detective business to help a friend in need in this enthralling first mystery in the New York Times bestselling series.