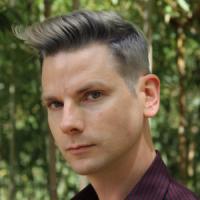 Caleb Roehrig is a writer and television producer originally from Ann Arbor, Michigan. Having also lived in Chicago, Los Angeles, and Helsinki, Finland, he has a chronic case of wanderlust, and can recommend the best sights to see on a shoestring budget in over thirty countries. A former actor, Roehrig has experience on both sides of the camera, with a résumé that includes appearances on film and TV—as well as seven years in the stranger-than-fiction salt mines of reality television. In the name of earning a paycheck, he has: hung around a frozen cornfield in his underwear, partied with an actual rock-star, chatted with a scandal-plagued politician, and been menaced by a disgruntled ostrich.

If you watched Ocean's 8 and think, "This needs drag queens!" or are desperately waiting for Ally Carter to write another Heist Society book, you need Death Prefers Blondes! It's Hamlet with jewel heists, socialites, and drag queens! - John

Rufus was already having a bad night when his sister called and said, "I don't know to do. I'm so scared. I think I - HELP ME!" When Rufus finds her she's lying next to her boyfriend, knife in hand, and covered in his blood. Now Rufus needs to team up with his ex to clear April's name. Roehrig creates a real sense of danger for his characters as they try to piece together this well-plotted mystery. It's one of the best thrillers I've read in a while. - John

Flynn's girlfriend is missing. As he starts to ask questions he discovers he didn't know her at all. But January wasn't the only one keeping secrets...

Roerig writes fantastic, well-plotted thrillers about people who have learned their lives are changed, and they have to solve the mystery in front of them before they can start puttings things back together. - John