Our event with Ben Coes has been canceled. 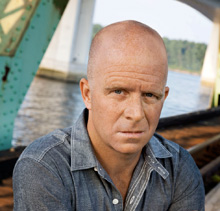 Ben Coes has worked at the White House as a speechwriter for the administrations of President Ronald Reagan and President George H.W. Bush. Coes subsequently wrote speeches for Texas oilman billionaire T. Boone Pickens. For more than a decade, Coes has been in private industry, where he is a partner at The Mustang Group LLC. He served as campaign manager for Mitt Romney's successful run for Governor of Massachusetts and was subsequently invited to be a Visiting Fellow at Harvard University's John F. Kennedy School of Government. A graduate of Columbia College, where he won the prestigious Bennett Cerf Memorial Prize for Fiction during his senior year, Ben lives in the Boston area with his wife and four children.

"This new series has me very excited." —Brad Thor

As the brutal Russian mafia becomes the most powerful and deadly criminal enterprise in the U.S., it’s up to covert operative Rob Tacoma to fight back, in a new series by New York Times bestseller Ben Coes.

THE FUTURE OF THE WORLD COMES DOWN TO TWENTY-FOUR HOURS…AND ONE MAN.

Dewey Andreas tried to quit. America’s top special forces operative, he has had enough. But after the President himself asks, Dewey agrees to do one last mission. That’s when it all goes wrong.

Some of the most powerful people in the government, military, and private sector are planning to take over the reins of the White House—and populate it with their own sympathizers and puppets. They’ve already taken out the Speaker of the House, whose death was made to look like an accident. The president and VP are next in line. . .

Deep within the Pentagon, a covert, multi-billion-dollar arms-for-influence program was created. The mission: to protect the country and its allies from terrorist acts by secretly enabling a hand-picked man to emerge as the most powerful leader in the Middle East.

“Coes blows the competition away”—Brad Thor
Cloud, the code name a high-level Russian hacker, has acquired a nuclear weapon. It’s an older bomb from the USSR’s Cold War arsenal with the power to devastate a major city. Fueled by a dark and personal vendetta, Cloud has put it onto an anonymous trawler, piloted by jihadists, headed straight to America.

Eye for an Eye: A Dewey Andreas Novel (Mass Market)

When Dewey Andreas uncovers the identity of a mole embedded at a high level in Israel's Mossad, it triggers a larger, more dangerous plot. The mole was the most important asset of Chinese Intelligence, and the head of China's Ministry of State Security, Fao Bhang, responds to the discovery by placing a kill order on Dewey himself.

When a fragile peace breaks down between Pakistan and India, the United States is forced to intervene. When a rapidly escalating war threatens to engulf the entire region, the president must find a way to shut it down immediately—or else face total destruction for the world at large.