The Belles and Brujas Tour 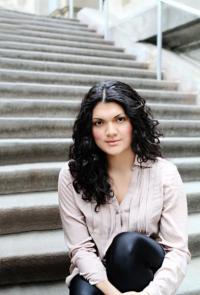 Zoraida Córdova is the award-winning author of The Vicious Deep trilogy and the Brooklyn Brujas series. Her short fiction has appeared in the New York Times bestselling anthology, Star Wars: From a Certain Point of View, and Toil & Trouble: 16 Tales of Women and Witchcraft. She is a New Yorker at heart and is currently working on her next novel. Send her a tweet @Zlikeinzorro.

Dhonielle Clayton will sign and discuss The Belles (Freeform; $17.99). 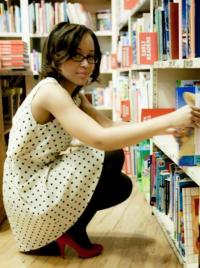 Dhonielle Clayton is the coauthor of the Tiny Pretty Things series. She grew up in the Washington, DC, suburbs on the Maryland side and spent most of her time under her grandmother's table with a stack of books. A former teacher and middle school librarian, Dhonielle is cofounder of CAKE Literary, a creative development company whipping up decidedly diverse books for a wide array of readers, and COO of the non-profit, We Need Diverse Books. She's got a serious travel bug and loves spending time outside of the USA but makes her home in New York City, where she can most likely be found hunting for the best slice of pizza. You can also find her online at www.dhonielleclayton.com or follow her @brownbookworm. 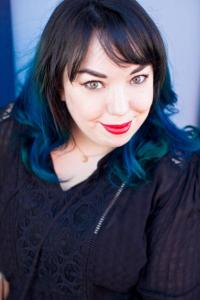 Jaime Questell will sign and discuss her debut novel, By a Charm and a Curse (Entangled; $17.99).

Jaime Questell grew up in Houston, Texas, where she escaped the heat and humidity by diving into stacks of Baby Sitter’s Club and Sweet Valley High books. She has been a book seller (fair warning: book lovers who become book sellers will give half their paychecks right back to their employers), a professional knitter, a semi-professional baker, and now works as a graphic designer in addition to writing. Currently, she lives in the suburbs of Houston with her family and pets. 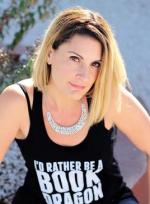 Mari Mancusi always wanted a dragon as a pet. Unfortunately the fire insurance premiums proved a bit too large and her house a bit too small--so she chose to write about them instead. Today she works as an award-winning young adult author and freelance television producer, for which she has won two Emmys.

When not writing about fanciful creatures of myth and legend, Mari enjoys traveling, cosplay, snowboarding, watching cheesy (and scary) horror movies, and her favorite guilty pleasure—playing videogames. A graduate of Boston University, she lives in Austin, Texas with her husband Jacob, daughter Avalon, and their two dogs.

Katharine McGee is the author of the New York Times bestselling Thousandth Floor series. She studied English and French literature at Princeton University and has an MBA from Stanford. It was during her years in New York, working as an editor by day and writing by night, that she began a manuscript about life in a futuristic skyscraper. Katharine lives with her husband in her hometown of Houston, Texas.

Next in the Brooklyn Brujas series of fantasy novels that follow three witch born sisters as they develop their powers and battle magic in their hometown and the worlds beyond, from the author of The Inheritance of Orquídea Divina.

Lula must let go of the ghosts of her past to face the actual living dead of her present.

Camellia Beauregard is a Belle. In the opulent world of Orleans, Belles are revered, for they control Beauty, and Beauty is a commodity coveted above all else. In Orleans, the people are born gray, they are born damned, and only with the help of a Belle and her talents can they transform and be made beautiful.

By a Charm and a Curse (Hardcover)

A kiss is never just a kiss.

Twelve-year-old Hailey and her BFFs are all big fans of Collin Prince, a YouTube star, and swoon-worthy crush.

The first book in the Latinx-infused Queer fantasy series from Zoraida Córdova, highly acclaimed author of The Inheritance of Orquídea Divina, that follows three sisters—and teen witches—as they develop their powers and battle magic through epic questing in the realms beyond.

Now a Netflix TV show! Black Swan meets Pretty Little Liars in this soapy, drama-packed novel featuring diverse characters who will do anything to be the prima at their elite ballet school.

Twelve-year-old Hailey and her BFFs are all big fans of Collin Prince, a YouTube star, and swoon-worthy crush.

Once upon a time the world burned.

Until a girl and her dragon smothered the flame.

But the spark that ignited the apocalypse never went out.

And the scorch is about to begin…

A girl at the end of the world. Two brothers fighting for opposite sides.

And a dragon who can save them all…Or set the world on fire.

Save the Dragon. Destroy the World.

This edition includes a bonus prequel chapter and a sneak peek at the final book in the series, The Towering Sky!

This edition includes never-before-seen deleted scenes, fan-favorite graphics, and a sneak peek to the next book in the series, The Dazzling Heights!