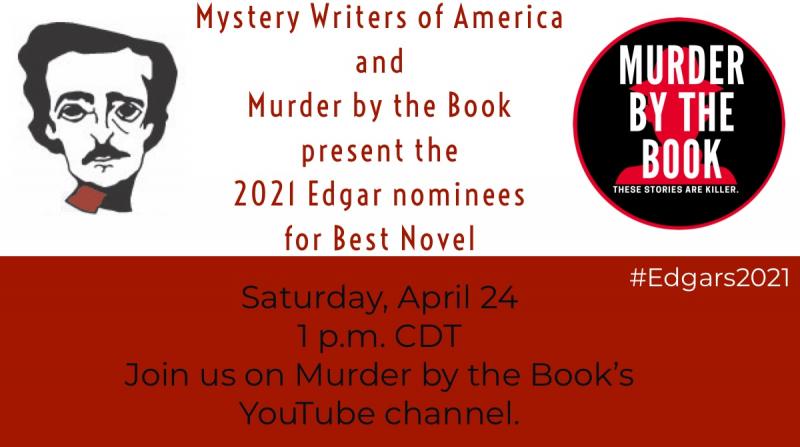 Join us on YouTube as we partner with the Mystery Writers of America to celebrate this year's Best Novel Edgar Nominees!

Deepa Anappara was born in Kerala, southern India, and worked as a journalist in India for eleven years. Her reports on the impact of poverty and religious violence on the education of children won several awards. Her debut novel Djinn Patrol on the Purple Line was longlisted for the Women’s Prize for Fiction 2020, and was named as one of the best books of the year by The New York Times, NPR, The Washington Post and Time. It is being translated into 22 languages.

Caroline B. Cooney is the author of nearly 90 YA novels, two picture books, and now, Before She Was Helen, her second adult novel after a 40 year break!

Richard Osman is a British television producer and presenter. The Thursday Murder Club is his first and, so far, best novel.

Ivy Pochoda is the author of the critically acclaimed books Visitation Street and Wonder Valley, in addition to These Women. She lives in Los Angeles where she teaches creative writing at Studio 526 in Skid Row. She attended Harvard College and has an MFA from Bennington College. She was once a world class athlete. She is the co-author of the bestselling middle grade Epoca series with Kobe Bryant.

Kwei Quartey is a crime fiction writer and physician based in Pasadena, California. Before he retired from medicine in 2018 to write full time, he managed both careers by writing early in the morning before clinic. Quartey was born in Ghana, West Africa, to a Ghanaian father and Black American mother, both of whom were lecturers at the University of Ghana.  As a crime fiction writer, Kwei made the Los Angeles Times Bestseller List in 2009 with his debut Inspector Darko Dawson novel, WIFE OF THE GODS, set in Ghana. The following year, the GOG National Book Club voted him Best Male Author. A new series with female PI Emma Djan, also set in Ghana, debuted to acclaim in January 2020 with the novel THE MISSING AMERICAN, followed by the second in the series, SLEEP WELL, MY LADY, January 12, 2021. THE MISSING AMERICAN was nominated for the Edgar Allan Poe Award for Best Novel.

Heather Young is the author of two novels. Her debut, The Lost Girls, was nominated for an Edgar Award for Best First Novel and won the Strand Award for Best First Novel. The Distant Dead, published in 2020, was nominated for an Edgar Award for Best Novel and named one of the ten best mystery and suspense books of the year by Book Page. A former litigator, Heather traded the legal world for the literary one and earned her MFA from the Bennington Writing Seminars in 2011. She lives in Mill Valley, California, where she writes, bikes, hikes, and reads books by other people that she wishes she’d written.

Djinn Patrol on the Purple Line: A Novel (Paperback)

Discover the “extraordinary” (The Washington Post) debut novel that “announces the arrival of a literary supernova” (The New York Times Book Review),“a drama of childhood that is as wild as it is intimate” (Chigozie Obioma).

Before She Was Helen (Paperback)

These Women: A Novel (Paperback)

SHORTLISTED FOR THE EDGAR AWARD FOR BEST NOVEL

A Recommended Book From

A 2021 Edgar Nominee for Best Novel

Accra private investigator Emma Djan's first missing persons case will lead her to the darkest depths of the email scams and fetish priests in Ghana, the world's Internet capital.

The Distant Dead: A Novel (Hardcover)