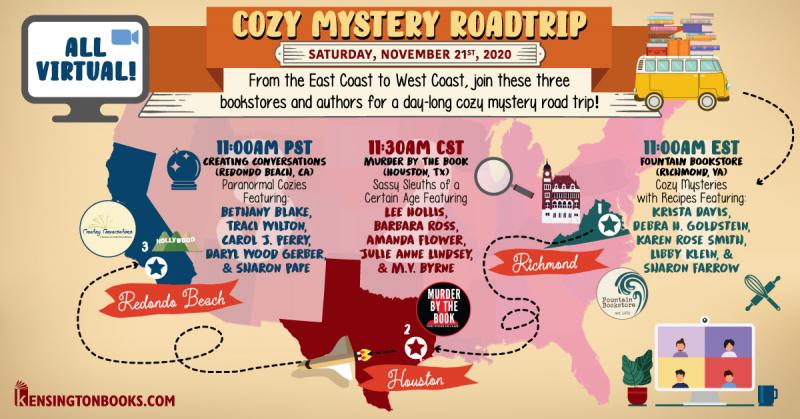 Join us online as the Kensington Cozy Mystery Roadtrip stops in Houston to discuss Sassy Sleuths of a Certain Age with Lee Hollis, Barbara Ross, Julie Anne Lindsay, Amanda Flower, and M.V. Byrne. This is a ticketed event. Zoom access will be granted with the purchase of either an $8 ticket or the purchase of a book by any of the participating authors.

Each attendee will also receive a Kensington Cozies "Where Murder Lives" bag.

Click here for more info about the other stops.

Lee Hollis is the pen name for Rick Copp, a veteran Hollywood screenwriter who has written for numerous television series, including The Golden Girls, Wings, Scooby-Doo, Teen Titans, and Barbershop. He is the co‑writer of The Brady Bunch Movie and has written a number of novels under his own name. He also produces, writes, and stars in the hit web series Where the Bears Are. With his sister Holly Simason, he co‑authors the Hayley Powell Food & Cocktail Mysteries book series using the Lee Hollis name. He lives in Palm Springs, California. Visit him at www.leehollismysteries.com

Barbara Ross is the author of the Maine Clambake Mysteries. The first book in the series, Clammed Up was nominated for an Agatha Award for Best Contemporary Novel, the RT Book Reviews, Reviewer’s Choice Best Book Award for Amateur Sleuth and was a finalist for the Maine Literary Award for Crime Fiction. She is co-editor/co-publisher of Level Best Books, which produces anthologies of crime stories by New England authors. She writes at her home overlooking the harbor in Boothbay Harbor, Maine. Readers can visit her website at www.BarbaraRossAuthor.com.

Julie Anne Lindsey is a multi-genre author who writes the stories that keep her up at night. When she's not creating new worlds and organizing the epic adventures of fictional characters, Julie can be found carpooling her three kids around Northeastern Ohio and plotting with her shamelessly enabling friends. Today, she hopes to make someone smile. One day she plans to change the world. Julie is a member of the International Thriller Writers, Romance Writers of America, and Sisters in Crime. Visit her online at www.JulieAnneLindsey.com.

Amanda Flower is the USA Today bestselling and Agatha Award-winning mystery author of over twenty-five novels, including the nationally bestselling Amish Candy Shop Mystery Series, the Amish Matchmaker Mysteries, and several series written under the name Isabella Alan. An organic farmer and former librarian, Amanda lives in Northeast Ohio and can be found online at AmandaFlower.com.

M.V. Byrne was born and raised in Lansing, and much like the heroine of his Mitten State Mystery Series, his family has had a home on Lake Michigan for nearly 100 years. He has an extensive career in television, first working at NBC on shows including Today, The David Letterman Show and Saturday Night Live, and later writing for Mysteries & Scandals on E! Entertainment, Behind the Music at Vh1, The Tyra Banks Show, Good Morning America and Nancy Grace, to name a few. He currently lives in Los Angeles, where he continues to work as a writer/producer in unscripted television, but still goes back to his home state of Michigan every summer. He can be found online at www.MVByrne.com.

This ticket includes a Zoom link to participate in our Kensington Cozy Roadtrip. The Zoom information will be sent to your email address on November 19th.

Each attendee will also receive a Kensington Cozies "Where Murder Lives" bag.

(Please note, if you purchased a book from one of the participating authors you do NOT need to purchase a separate ticket).

For retiree-turned-PI Poppy Harmon, spending her golden years running the Desert Flowers Detective Agency is far from the glamorous life she once knew. But becoming ensnared in two twisted Palm Springs crimes might be her worst look yet . . .

Lee Hollis begins a delightful new series in which Poppy Harmon and her friends find that life after retirement can be much busier—and deadlier—than any of them ever anticipated . . .

Jane Darrowfield is a year into her retirement, and she’s already traveled and planted a garden. She’s organized her photos, her recipes, and her spices.  The statistics suggest she has at least a few more decades ahead of her, so she better find something to do . . .

Nothing’s sweeter than a fruitful family business, and for Winona Mae Montgomery and her Granny Smythe, that means Smythe Orchards in Blossom Valley, Virginia. But this year’s apple crop is especially juicy—with scandal . . .

Apples are at the core of the family business run by Winona Mae Montgomery and her Granny Smythe. But this year’s crop is unseasonably ripe with murder . . .

Veteran television writer M.V. Byrne debuts with the first Mitten State Mystery featuring Jill-of-all-trades Isabel Puddles, a widowed mother of two grown children who lives in the tiny hamlet along Lake Michigan where she grew up.

Courting Can Be Killer (An Amish Matchmaker Mystery #2) (Mass Market)

In USA Today bestselling author Amanda Flower's second Amish Matchmaker Mystery, Millie Fisher has plenty to keep her busy through her golden years, whether it's minding a pair of rambunctious goats, meetings with her quilting circle, and matchmaking. But the witty widow always makes time to solve the odd murder...

Matchmaking Can Be Murder (An Amish Matchmaker Mystery #1) (Mass Market)

Matchmaking can be murder . . .