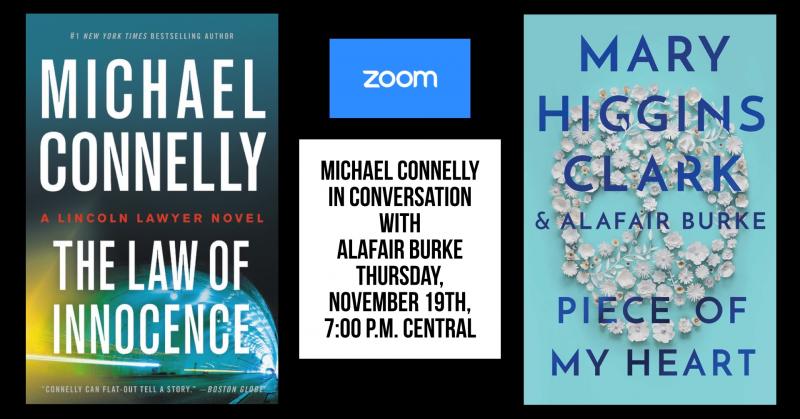 Join Alafair Burke as she chats with Michael Connelly about The Law of Innocence, the newest Lincoln Lawyer novel.

Zoom access will be granted with the purchase of a copy of the The Law of Innocence from Murder By The Book. Zoom details will be emailed by Tuesday, November 17th. Signed copies of The Law Of Innocence are available while supplies last.

Michael Connelly is the author of thirty-four previous novels, including the New York Times bestsellers, Fair Warning, The Night Fire, and Dark Sacred Night. His books, which include the Harry Bosch series, the Lincoln Lawyer series, and the Renée Ballard series, have sold more than seventy-four million copies worldwide. Connelly is a former newspaper reporter who has won numerous awards for his journalism and his novels. He is the executive producer of Bosch, starring Titus Welliver, and the creator and host of the podcast Murder Book. He spends his time in California and Florida.

Alafair Burke is the Edgar-nominated, New York Times bestselling author of twelve novels, including The Wife, The Ex, If You Were Here, Long Gone, and the Ellie Hatcher series. A former prosecutor, she is now a professor of criminal law and lives in Manhattan.

The Law of Innocence (A Lincoln Lawyer Novel #6) (Hardcover)

Lincoln Lawyer Mickey Haller is back on the job in this heart-stopping thriller from a renowned #1 New York Times bestselling author.

On the night he celebrates a big win, defense attorney Mickey Haller is pulled over by police, who find the body of a former client in the

Piece of My Heart (Hardcover)

In the latest thrilling collaboration from #1 New York Times bestselling author and “Queen of Suspense” Mary Higgins Clark and Alafair Burke, television producer Laurie Moran must solve the kidnapping of her fiancée’s nephew—just days before her wedding.