The Word Is Murder (Paperback) 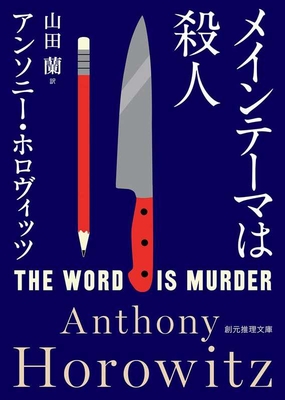 What a book!!!  I loved it!!!  Horowitz has again confirmed he's one of the best! The book begins with an older lady walking into a funeral home -- to plan her own funeral.  Six hours later, she's dead.

Daniel Hawthorne, a brilliant albeit disgraced Scotland Yard police detective is called in as a consultant to solve the crime.  But Hawthorne wants someone to write a novel based on his investigation, and since he's worked on several projects with Anthony Horowitz in the past...seems only logical to get Horowitz to follow him around and write the story. So begins the collaboration of the two.  As Horowitz becomes Watson to Hawthorne's Holmes, they soon get down to solving the crime.  The juxtaposition of the two characters - Hawthorne (eccentric and multilayered); Horowitz (methodical and detailed) is brilliant.

“When a healthy 60-year-old woman is found strangled in her London home the very day she had organized and paid for her own funeral, former police detective—now consultant—Daniel Hawthorne convinces author Anthony Horowitz to shadow his investigation to eventually publish this very story. Imagine sitting in a darkened English pub listening to Horowitz bemoaning his involvement as he tells the story of the unlikeable but captivating Hawthorne. Readers will quickly join in playing detective as characters, plot twists, clues, and red herrings escalate while enjoying the old-fashioned feel of Agatha Christie and Sherlock Holmes in a modern setting. Delicious!”
— Jennifer Gwydir, Blue Willow Bookshop, Houston, TX