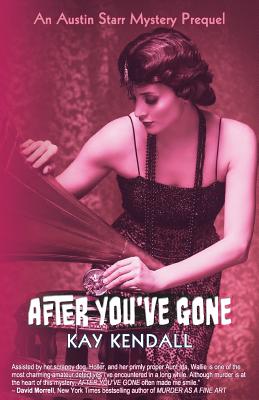 Walter MacGregor (aka Wallie) lives in Gunmetal, Texas, when Prohibition is the law of the land. Her calm existence is shattered when her father's rum-running brother Rory lands on the MacGregors' doorstep. Absent for twenty-four years, Rory says he's fleeing the wrath of enraged bootleggers. His tales of adventure--and the natural charisma of a born ladies' man--charm Wallie. Yet, his long-lost brother's same traits appall her father, a respected judge.

Wallie craves thrilling exploits after a protected upbringing. Her mother died when she was young, and Judge Walter MacGregor (after whom she was named) raised her with help from her strict maternal aunt and the family's housekeeper, Athalia. While allowed to hunt, fish, and ride "just like a boy," Wallie lives an existence otherwise short on adventure. She wants her own escapades, as Poppa's tales of courthouse shenanigans and her own deep reading of Sherlock Holmes tales have whetted her appetite. After just one conversation with Uncle Rory, Wallie whispers to her ever-present beagle puppy Holler that she's eager to learn about her uncle's daring life. She has never known two brothers so dissimilar.

But soon a freak accident rocks the quiet town. While the local sheriff finds nothing suspicious, Wallie believes the crime scene shows evidence of foul play. Annoyed that no one agrees with her, she sets out to prove her theory.

Wallie snoops into her family's past and finds clues that point to shady establishments in the sinful port city of Galveston on the Gulf Coast. When dour and controlling Aunt Ida takes Wallie to Houston to visit a sick relative, Wallie convinces her to detour to Galveston on the way home. There they have run-ins with two gangsters who rule the town, plus members of the Chicago mob sent south by their boss "Al," and two flamboyant flappers. "They're floozies," sniffs Aunt Ida, but they are useful ones, as they proceed to divulge secrets from Gunmetal that are decades old.

Wallie's curiosity and daring push her and Aunt Ida into sinister situations that ooze with danger. As they conspire to get out of the clutches of bad men, little do they suspect that more danger awaits them back home in Gunmetal--another death, Wallie's warring suitors, and a missing beagle puppy, all made more dangerous by an advancing "blue norther," extreme weather famous in Texas during the autumn season.

Wallie begins to wonder if perhaps she is not cut out to be a female version of a consulting detective, Texas style. Then again, she knows she must persist.