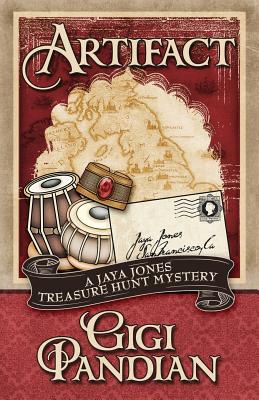 "If Indiana Jones had a sister, it would definitely be historian Jaya Jones." - Suspense Magazine When historian Jaya Jones receives a mysterious package containing a jewel-encrusted artifact from India, she discovers the secrets of a lost Indian treasure may be hidden in a Scottish legend from the days of the British Raj. But she's not the only one on the trail. From San Francisco to the Highlands of Scotland, Jaya must evade a shadowy stalker as she follows hints from the hastily scrawled note to a remote archaeological dig. Helping her decipher the cryptic clues are her magician best friend, a devastatingly handsome art historian with something to hide, and a charming archaeologist running for his life. When a member of the dig's crew is murdered, Jaya must figure out which of the scholars vying for her affections might be the love of her life-and which one is a killer. Part of the Henery Press Mystery Series Collection, if you like one, you'll probably like them all ARTIFACT is the first book in the Jaya Jones Treasure Hunt Mystery series, named a Best of 2012 Mystery by Suspense Magazine. Be sure to watch for the next one, PIRATE VISHNU, coming February 2014. "Pandian's new series may well captivate a generation of readers, combining the suspenseful, mysterious and romantic." - 4 stars from Romantic Times Book Reviews "How wonderful to see a young, new writer who harks back to the Golden Age of mystery fiction. Artifact is witty, clever, and twisty... Do you like Agatha Christie? Elizabeth Peters? Then you're going to love Gigi Pandian." - Aaron Elkins, Edgar Award-Winning Author of the Gideon Oliver "Skeleton Detective" Mysteries "Fans of Elizabeth Peters will adore following along with Jaya Jones and a cast of quirky characters as they pursue a fabled treasure." - New York Times Bestselling Author - Juliet Blackwell, Author of the Art Lover's Mystery Series (written as Hailey Lind) "In her fast-paced and entertaining debut novel, Gigi Pandian brings readers into a world full of mystery and history... As with classics in the genre, this first book in the Jaya Jones series will appeal to readers who enjoy delving into a complex puzzle." - ForeWord Reviews "Elizabeth Peters' Vicky Bliss mysteries were fun romantic capers with unexpected twists. Gigi Pandian offers that same exotic world of treasure hunts, foreign lands, and a touch of romance. I miss Vicky Bliss. But, now we're all lucky to have Jaya Jones' treasure hunts. I hope Artifact is just the first of Gigi Pandian's skillfully written capers." - Lesa's Book Critiques "Masterfully plotted." - Midwest Book Review.