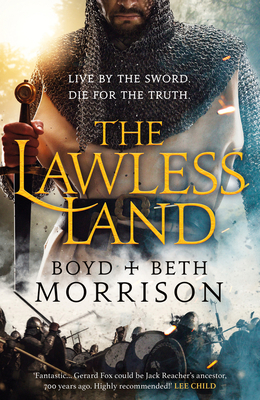 Ex-communicated knight Gerard Fox is a battle-hardened warrior whose ancestral home was unjustly taken from him. Now, he roams across the known world of Europe looking for work as a man-at-arms. Equipped with only his Damascus-steel sword and war bow, Fox takes out tyrannical and dishonorable men in a land still blighted by the Black Death.

In his ongoing crusade to deliver justice, Fox comes to the aid of Lady Isabel, who is fleeing from her brutal betrothed. But she hasn't told him the whole story. Isabel is guarding a priceless holy relic. One many men would kill for.

Fox and Isabel soon find they are being chased across the continent and try to evade those who seek the relic. But as more assassins close in, Fox realizes they will stop at nothing to possess the sacred treasure that Isabel has sworn to protect...

Boyd Morrison is the #1 New York Times bestselling author of twelve thrillers, including six collaborations with Clive Cussler in the Oregon Files adventure series. His first novel, The Ark, was an Indie Next Notable pick and has been translated into more than a dozen languages. He has a PhD in industrial engineering from Virginia Tech. He lives in Seattle. Beth Morrison is Senior Curator of Manuscripts at the J. Paul Getty Museum. A leader in her field, she has curated several major exhibitions, including 'Imagining the Past in France, 1250-1500,' and 'Book of Beasts: The Bestiary in t

Praise for THE LAWLESS LAND

"A stunning thriller with a premise as ingenious as it is flawlessly executed." —James Rollins (on The Ark)

"Action, fascinating historical references, and a nail-biting battle of wits." —Lisa Gardner (on The Vault)