A Tiding of Magpies: A Birder Murder Mystery (Paperback) 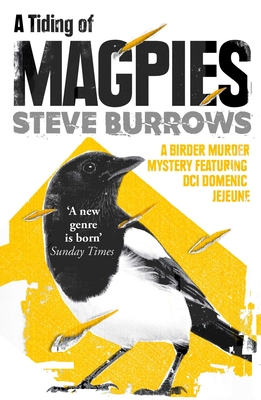 This is book number 5 in the Birder Murder Mystery series.

The fifth instalment of the Birder Murder series


When his most celebrated case is suddenly reopened, Detective Chief Inspector Jejeune's long-buried secrets threaten to come to light. Meanwhile, his girlfriend, Lindy, faces an unseen threat of her own, one which Jejeune may not be able to protect her from. Between fending off inquiries from the internal review and an open murder case to solve, more than ever Jejeune will have to rely on the help of the stalwart Sergeant Danny Maik. But Maik is learning things on his own that have caused him to question his DCI‘s actions, both past and present. In the current case, and in the former one, the facts seem clear enough. But often the most insidious lies hide behind the most honest-seeming truths.

Steve Burrows has pursued his birdwatching hobby on six continents. He is a former editor of the Hong Kong Bird Watching Society magazine and a contributing field editor for Asian Geographic. Steve now lives with his wife, Resa, in Oshawa, Ontario.

‘A rattling good read… Burrows knows his birds, but he knows how to create a page-turner, too, so keep it handy for downtime between birding expeditions.’
— Birdwatching

Praise for the Birder Murder Mysteries:

'A murder plot built around birdwatching doesn’t, at first, seem plausible or even possible. But Burrows pulls it off... Riveting from first page to final line.' Globe and Mail

'A suspenseful and well-crafted mystery perfect for the beach.' Morning Star