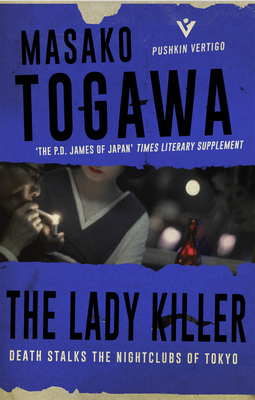 This is book number 20 in the Pushkin Vertigo series.

A classic mystery from one of Japan's best-loved crime writers

The Lady Killer leads a double life in the shadow world of Tokyo's singles bars and nightclubs. By day a devoted husband and hard worker, by night he cruises nightclubs cafes and cinemas in search of lonely single women to seduce.

But now the hunter is being hunted, and in his wake lies a trail of gruesome murders. Who is the culprit? The answer lies tangled in a web of clues, and to find it he must accept that nothing is what it seems.

This is a moody, brilliantly plotted mystery from the writer dubbed 'the P.D. James of Japan'.

Masako Togawa (1931-2016) was born in Tokyo. Her father died when she was young, and after leaving school she worked as a typist for some years, before stepping onto the stage as a cabaret performer in 1954. She soon began to write backstage during the breaks between her performances, and in 1962, her debut novel The Master Key was published, and won the Edogawa Rampo Prize. She went on to become a hugely successful crime writer, but continued to lead a colourful parallel life as a singer, actress, feminist, nightclub owner and gay icon. She died in 2016 at the age of 83.

'Full of subtly menacing tensions and sharp psychological insights, told in lean, sparsely ornamented style. This one is a must for the discerning reader.' - Kirkus

‘There's a great and distinct timbre to this book … it certainly has the cleverness ultimately to keep a genre reader really satisfied.’ — The Bookbag

"Even when you think you know just where the book is headed… you don’t… Thoroughly enjoyable." — David’s Book World