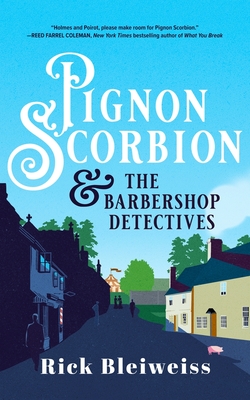 For fans of Sherlock Holmes and Agatha Christie's Hercule Poirot, author Rick Bleiweiss's quirky new detective and ensemble cast of characters set against the backdrop of small-town England in the 1910s will feel both comfortingly familiar and thrillingly new.

The year is 1910, and in the small and seemingly sleepy English municipality of Haxford, there's a new chief police inspector. At first, the dapper and unflappable Pignon Scorbion strikes something of an odd figure among the locals, who don't see a need for such an exacting investigator. But it isn't long before Haxford finds itself very much in need of a detective.

Luckily, Scorbion and the local barber are old acquaintances, and the barbershop employs a cast of memorable characters who--together with an aspiring young ace reporter for the local Morning News--are nothing less than enthralled by the enigmatic new chief police inspector.

Investigating a trio of crimes whose origins span three continents and half a century, Pignon Scorbion and his tonsorial sleuths interview a parade of interested parties, but with every apparent clue, new surprises come to light. And just as it seems nothing can derail Scorbion's cool head and almost unerring nose for deduction, in walks Thelma Smith--dazzling, whip-smart, and newly single.