The Marylebone Drop: A Novella (A Slough House Novella) (Paperback) 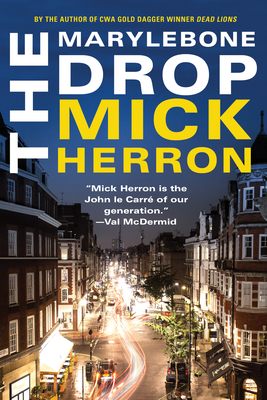 By Mick Herron
$7.99
Able to Backorder

A drop, in spook parlance, is the passing on of secret information.
It’s also what happens just before you hit the ground.

Old spooks carry the memory of tradecraft in their bones, and when Solomon Dortmund sees an envelope being passed from one pair of hands to another in a Marylebone café, he knows he’s witnessed more than an innocent encounter. But in relaying his suspicions to John Bachelor, who babysits retired spies like Solly for MI5, he sets in motion a train of events that will alter lives.

Mick Herron is a British novelist and short-story writer who was born in Newcastle and studied English at Oxford. He is the author of six books in the Slough House series, four Oxford mysteries, and three standalone novels. His work has won the CWA Gold Dagger for Best Crime Novel, the Steel Dagger for Best Thriller, and the Ellery Queen Readers Award, and been nominated for the Macavity, Barry, Shamus, and Theakstons Novel of the Year Awards. He currently lives in Oxford and writes full-time.

Praise for Mick Herron
​
“Mick Herron is the John le Carré of our generation.”
—Val McDermid

“Thoroughly gripping espionage, focused on intelligent plotting over action for its own sake—think le Carré, but with a heartier dash of dry humor.”
—The Seattle Times

“[Herron] is superb at evoking the le Carré-esque air of ennui, cynicism and self-loathing which permeates an intelligence service on its uppers, but which remains—the alternative being too awful to contemplate—duty bound to keep calm and carry on.”
—The Irish Times

“It’s not often a reviewer can say, ‘You’ve never read anything quite like this’ but it’s a safe encomium to use in the case of Mick Herron. The author’s idiosyncratic writing is unique in his genre: the spycraft of le Carré refracted through the blackly comic vision of Joseph Heller’s Catch-22.”
—Financial Times

"Mick Herron is a master."
—CrimeReads