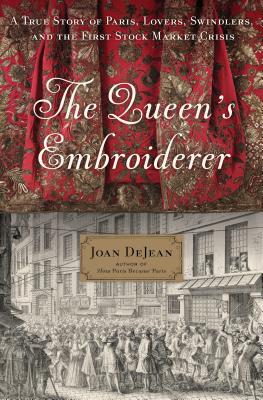 From the author of How Paris Became Paris, a sweeping history of high finance, the origins of high fashion, and a pair of star-crossed lovers in 18th-century France.

Paris, 1719. The stock market is surging and the world's first millionaires are buying everything in sight. Against this backdrop, two families, the Magoulets and the Chevrots, rose to prominence only to plummet in the first stock market crash. One family built its name on the burgeoning financial industry, the other as master embroiderers for Queen Marie-Thérèse and her husband, King Louis XIV. Both patriarchs were ruthless money-mongers, determined to strike it rich by arranging marriages for their children.

But in a Shakespearean twist, two of their children fell in love. To remain together, Louise Magoulet and Louis Chevrot fought their fathers' rage and abuse. A real-life heroine, Louise took on Magoulet, Chevrot, the police, an army regiment, and the French Indies Company to stay with the man she loved.

Following these families from 1600 until the Revolution of 1789, Joan DeJean recreates the larger-than-life personalities of Versailles, where displaying wealth was a power game; the sordid cells of the Bastille; the Louisiana territory, where Frenchwomen were forcibly sent to marry colonists; and the legendary "Wall Street of Paris," Rue Quincampoix, a world of high finance uncannily similar to what we know now. The Queen's Embroiderer is both a story of star-crossed love in the most beautiful city in the world and a cautionary tale of greed and the dangerous lure of windfall profits. And every bit of it is true.

Joan DeJean has been Trustee Professor at the University of Pennsylvania since 1988. She previously taught at Yale and at Princeton. She is the author of eleven books on French literature, history, and material culture of the seventeenth and eighteenth centuries, including most recently How Paris Became Paris: The Invention of the Modern City (2014); The Age of Comfort: When Paris Discovered Casual--and the Modern Home Began (2009); The Essence of Style: How the French Invented High Fashion, Fine Food, Chic Cafés, Style, Sophistication, and Glamour (2005). She lives in Philadelphia and, when in Paris, around the corner from the house where, in 1612, this story began.

"A fascinating true story based on formidable detective work in the archives." - Valerie Steele, Director and Chief Curator, Museum at the Fashion Institute of Technology

"A convincing recreation of a feverish period in French history . . . DeJean guides the reader sure-footedly through the labyrinth of financial and family law, low and high politicking and general skulduggery that characterised the era . . . A fascinating and original book whose central importance is to have captured the turmoil, confusion and sometimes sheer wickedness that accompanied the formation of early modern capitalism." - Financial Times

"The tale of two 17th- and 18th-century French families, a story that begins as a fairy tale and ends as a nightmare." - Kirkus

"[The Queen’s Embroiderer] features guild-hopping, inheritance fraud, domestic abuse, eloping to England, sending toddlers to their deaths, locking the gates against the poor, and the occasional escape from a chain gang. There's an impressive depth of research—this is, as much as anything else, a mystery about the manipulation of record-keeping and identity . . . Some aspects of the wider upheaval are striking, as DeJean builds a credible picture of the mania of a nation becoming an empire: Monarchy as economy, war as opportunity, slavery as profit margin. . . . That there are so few loose ends in this two-century saga is a testament to DeJean's research." - NPR.org

"Joan DeJean tells the strange story of the Magoulet and Chevrot families, who rose to prominence as financiers and embroiderers to the French court . . . and shows how love and money made uncomfortable bed-mates." - Recommended Reads, New Statesman

"This exceptional and thoroughly researched book follows two prominent Parisian families from the 1600s to the French Revolution (1789-1799)." - Piecework

"DeJean is, in many ways, the perfect guide to the lives of Jean and Louise Magoulet and the darkly glittering, labyrinthine city in which they lived . . . Were it not for her, the full range of Magoulet’s crimes would remain unknown. Her command of the period and the most minute details of its social, cultural and economic life is masterful . . . DeJean is a spirited observer of the past." - Literary Review

"A tale of intrigue and finance in 18th-century France. And what a story it is! . . . Reading The Queen’s Embroiderer is a bit like listening to a fascinating, erudite lecture or examining an elaborate piece of needlework. . . . If your plans for springtime in France haven’t materialized, don’t despair. Just open The Queen’s Embroiderer and you’ll find yourself transported." - Bookpage.com

"In this twisted tale of two French families, DeJean interweaves the rise and fall of the Magoulets and the Chevrots, who took divergent paths to wealth, power, and ignominy . . . the fascinating details of seventeenth- and eighteenth-century Parisian fashion, politics, and feuds will reward persevering readers." - Booklist Online

"This lively history charts the growth of Paris from a city of crowded alleyways and irregular buildings into a modern marvel." - New Yorker on HOW PARIS BECAME PARIS