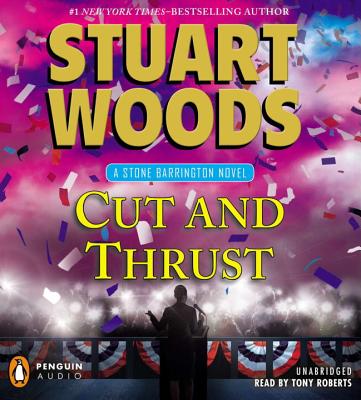 Stone Barrington enters the cutthroat fray of politics in the stunning thriller from the New York Times–bestselling author.

Stone Barrington has traveled to Los Angeles for the Democratic National Convention and finds that the political scene has been shaken up. First Lady Katherine Rule Lee is running for the party nomination, a loyal senator has died and left her seat vacant, and the Secret Service has received a credible threat toward Kate. It will take all of Stone’s discretion and powers of persuasion to help arrange things for a desirable outcome. . . .

Stuart Woods is the author of more than fifty-five novels, including the New York Times–bestselling Stone Barrington and Holly Barker series. He is a native of Georgia and began his writing career in the advertising industry. Chiefs, his debut in 1981, won the Edgar Award. An avid sailor and pilot, Woods lives in New York City, Florida, and Maine.

Praise for CUT AND THRUST

“Politics and peril mix in the newest Stone Barrington outing . . . there’s more than enough action and intrigue to keep the pages turning fast and furious in this exhilerating outing.”—Booklist

“This installment goes down as smoothly as a glass of Knob Creek.”—Publishers Weekly

“In Cut and Thrust, [Stuart Woods] brandishes suspense with practiced skill that is sure to keep his readers on the edge of their seats. . . . Fraught with enough twists and turns to keep even the most seasoned suspense reader guessing, Cut and Thrust once again proves that Woods is at the top of his game as he expertly takes readers along for a roller coaster ride that is as fun as it is surprising.”—fun107.com (WBSM)

“Woods is a perpetual reader-magnet. . . . The pages [fly] by fast and furious.” —Booklist