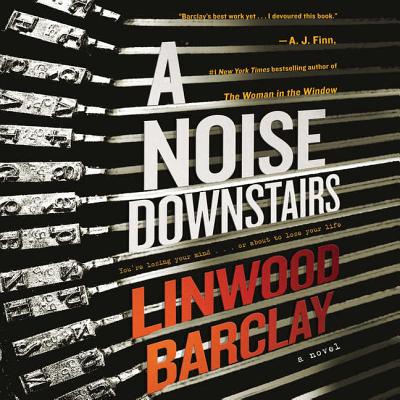 “If you’re looking for a wild ride, look no further, because you’re not going to get wilder than A Noise Downstairs. For a book that seems to have a little of everything — unresolved trauma, untrustworthy characters, a mysterious typewriter, and a hefty dose of the paranormal — Barclay tells his story with a smooth ease that will pull you through the pages at a breakneck speed. And, well, no spoilers, but the ending will blow your socks clean off.”
— Marya Johnston, Out West Books, Grand Junction, CO

The New York Times bestselling author of No Time for Goodbye returns with a haunting psychological thriller that blends the twists and turns of Gillian Flynn with the driving suspense of Harlan Coben, in which a man is troubled by odd sounds for which there is no rational explanation.

College professor Paul Davis is a normal guy with a normal life. Until, driving along a deserted road late one night, he surprises a murderer disposing of a couple of bodies. That's when Paul's normal existence is turned upside down. After nearly losing his own life in that encounter, he finds himself battling PTSD, depression, and severe problems at work. His wife, Charlotte, desperate to cheer him up, brings home a vintage typewriter--complete with ink ribbons and heavy round keys--to encourage him to get started on that novel he's always intended to write.

However, the typewriter itself is a problem. Paul swears it's possessed and types by itself at night. But only Paul can hear the noise coming from downstairs; Charlotte doesn't hear a thing. And she worries he's going off the rails.

Paul believes the typewriter is somehow connected to the murderer he discovered nearly a year ago. The killer had made his victims type apologies to him before ending their lives. Has another sick twist of fate entwined his life with the killer--could this be the same machine? Increasingly tormented but determined to discover the truth and confront his nightmare, Paul begins investigating the deaths himself.

But that may not be the best thing to do. Maybe Paul should just take the typewriter back to where his wife found it. Maybe he should stop asking questions and simply walk away while he can. . . .