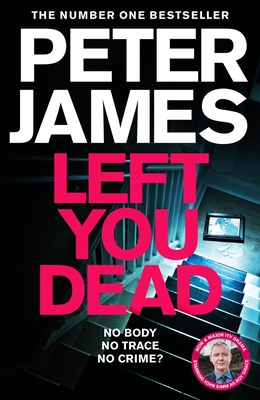 This is book number 17 in the Roy Grace series.

Sunday afternoon, a couple goes for a drive, visits a historic site and stops at the supermarket on the way home.  Sounds simple enough.

That’s Niall and Eden Paternoster.   Eden runs in to pick up some cat litter, Niall waits in the car…only to realize he’s been waiting in the parking lot for over 30 minutes.  The store is about to close, so he goes in to find Eden.  But, she’s not there.  She’s nowhere to be found.  When she doesn’t come home by morning, Niall calls the police.

With evidence of a crime having taken place in their home, Niall finds himself arrested.  But, without a body, will he be charged with murder?  Roy Grace and his team are on the case.

This 17th book in the Roy Grace series set in Brighton/Hove is just as fresh and new as his first.  I’ve always said there is a moment in each book that takes your breath away - makes you gasp - and he’s done it again.  As usual - an excellent read! - Brenda

Detective Superintendent Roy Grace investigates the case of a missing woman in Brighton in the 17th novel in Peter James’s bestselling series. Is this Roy Grace’s most challenging case yet? A mystery that is leaving him totally confounded for the first time in his career.

Most Sundays, Niall and Eden Paternoster like to go for a drive and visit country houses. She likes to look at them, he likes to dream that one day . . . However, most weeks they also end up bickering about something or other. This particular Sunday he wants to get back to catch the start of the French Grand Prix but she insists they stop somewhere to buy cat litter. Reluctantly, he pulls into the car park of a large supermarket and waits while she dashes in. He waits. And waits. But Eden doesn't come back out, she’s gone. When he gets home she’s not there either, and none of their friends or family have heard from her.

A few days later Niall is arrested on suspicion of her murder despite vigorously protesting his innocence. But as Roy Grace is called in to investigate the disappearance of Eden Paternoster, it soon transpires that nothing is as it seems . . .

Peter James is a UK number one bestselling author, best known for writing crime and thriller novels, and the creator of the much-loved Detective Superintendent Roy Grace. Globally, his books have been translated into thirty-seven languages. Synonymous with plot-twisting page-turners, Peter has garnered an army of loyal fans throughout his storytelling career – which also included stints writing for TV and producing films. He has won over forty awards for his work, including the WHSmith Best Crime Author of All Time Award, the Crime Writers' Association Diamond Dagger and a BAFTA nomination for The Merchant of Venice starring Al Pacino and Jeremy Irons for which he was an Executive Producer. Many of Peter’s novels have been adapted for film, TV and stage.

"Not since Judith Rossner’s Looking for Mr. Goodbar has a novel so wrenchingly portrayed the perils of looking for love in all the wrong places. . . . The action is fast and furious, but, as in all novels in this series, it’s held together by the unflappable character of Superintendent Grace. . . . James has won WHSmith’s Best Crime Author of All Time award and the British Crime Writers’ Association’s Diamond Dagger award. Not to be missed." --Booklist starred review of Dead at First Sight

"This skillful twister shows why James was awarded the 2016 CWA Diamond Dagger." --Publishers Weekly starred review of Need You Dead

"Immensely satisfying. . . .  James juggles his multiple story lines with panache as the action hurtles to a shattering conclusion." --Publishers Weekly starred review of Love You Dead

"James is a master of constructing the kind of plot that twists and turns, ensnaring the reader in its grasp." --Booklist on Love You Dead