The Smiling Man: A Novel (An Aidan Waits Thriller #2) (Hardcover) 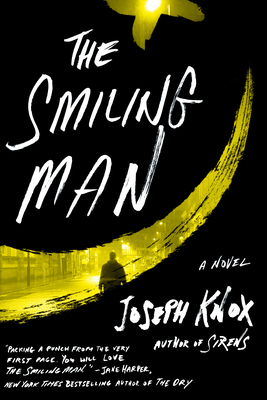 This is book number 2 in the An Aidan Waits Thriller series.

From the acclaimed author of Sirens, damaged Detective Aidan Waits returns in a mind-bending new thriller that will have everyone asking “Who is the Smiling Man?”

Aidan Waits is back on the night shift, the Manchester PD dumping ground for those too screwed-up for more glamorous work. But the monotony of petty crimes and lonesome nights is shattered when he and his partner are called to investigate a break-in The Palace, an immense, empty hotel in the center of the city.

There they find the body of a man. He is dead. The tags have been cut from his clothes, his teeth have been filed down, and even his fingertips have been replaced…
And he is smiling.

But as Waits begins to unravel the mystery of the smiling man, he becomes a target. Someone wants very badly to make this case disappear, and as their threats escalate, Aidan realizes that the answers may lie not only with the wealthy families and organized criminals connected to the Palace, but with a far greater evil from his own past.

To discover the smiling man’s identity, he must finally confront his own.

JOSEPH KNOX was born and raised in and around Stoke and Manchester, where he worked in bars and bookshops before moving to London. He runs, writes, and reads compulsively. The Smiling Man is the follow-up to his acclaimed and bestselling debut, Sirens.

“Vivid, visceral…This ambitious book will appeal to those who like particularly grim story lines and deeply flawed protagonists.” - Publisher's Weekly

"Knox takes his place alongside such writers as Val McDermid, David Peace, and Sophie Hannah in making Manchester a destination for crime fiction.”  - Kirkus

“Joseph Knox writes electric novels. His prose is neon-tinted; his plotting high-wattage.  A major voice in fiction, and a writer of furious talent.” --A.J. Finn, #1 New York Times bestselling author of The Woman in the Window

"If you liked Sirens, you will love The Smiling Man. Gritty, noir, and packing a punch from the very first page." – Jane Harper, New York Times bestselling author of The Dry

“Dark and stylish, but also that rare thing -- complex and impeccable plotting to complement the writing. This guy is the real deal.” – Val McDermid, Internationally bestselling author of Insidious Intent

"Talents such as Knox rarely emerge more than once in a generation. A crime fiction masterpiece." – Metro

"Promises to be a classic series" – The Guardian

"Sirens was one of the best books published last year and this intense, blackly comic follow-up is just as good. Joseph Knox has conjured up a sense of evil and corruption you can almost smell it." – Sunday Express

"Imperfect as Aidan Waits is, the Manchester DC is the shining light in a world peopled by the worst kinds of bad people. This is Knox's second Waits book in what holds the promise of a classic series." – The Sunday Times