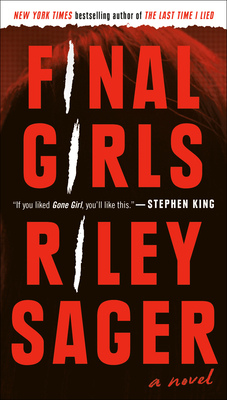 THE NATIONAL AND INTERNATIONAL BESTSELLER

“If you liked Gone Girl, you’ll like this.”—Stephen King

Ten years ago, six friends went on vacation. One made it out alive….

In that instant, college student Quincy Carpenter became a member of a very exclusive club—a group of survivors the press dubbed “The Final Girls”: Lisa, who lost nine sorority sisters to a college dropout's knife; Sam, who endured the Sack Man during her shift at the Nightlight Inn; and now Quincy, who ran bleeding through the woods to escape the massacre at Pine Cottage. Despite the media's attempts, the three girls have never met.

Now, Quincy is doing well—maybe even great, thanks to her Xanax prescription. She has a caring almost-fiancé; a popular baking blog; a beautiful apartment; and a therapeutic presence in Coop, the police officer who saved her life. Her mind won’t let her recall the events of that night; the past is in the past…until the first Final Girl is found dead in her bathtub and the second Final Girl appears on Quincy's doorstep.

Blowing through Quincy's life like a hurricane, Sam seems intent on making her relive the trauma of her ordeal. When disturbing details about Lisa's death emerge, Quincy desperately tries to unravel Sam's truths from her lies while evading both the police and bloodthirsty reporters. Quincy knows that in order to survive she has to remember what really happened at Pine Cottage.

Because the only thing worse than being a Final Girl is being a dead one.

Riley Sager is the pseudonym of an author who lives in Princeton, New Jersey. Riley is the New York Times bestselling author of the novels Survive the Night, Home Before Dark, Lock Every Door, The Last Time I Lied, and Final Girls, which has been published in more than two dozen countries and won the ITW Thriller Award for Best Hardcover Novel.

“Sager does an excellent job throughout of keeping the audience guessing until the final twist. A fresh voice in psychological suspense.”—Kirkus Reviews (starred review)

“The tale builds to a fantastic conclusion that will have readers thinking of Gillian Flynn’s Gone Girl and Paula Hawkins’s The Girl on the Train. . . . This brilliant horror/psychological thriller will fly off the shelves.”—Library Journal (starred review)

“You know the cold dread that washes over you while you’re watching a slasher flick? That’s how you’ll feel reading this blood-spattered mystery.”—Entertainment Weekly

“Stephen King dubbed this page-turner about three women with a seriously grim bond the ‘first great thriller of 2017.’ So yeah, it’s good.”—Cosmopolitan

“A twisty thriller that keeps you guessing whodunit.”—Family Circle

“In horror movies, the 'final girl' is the one young woman who makes it out of a slasher film alive. But in Sager's story, Quincy, who survived a mass murder, refuses to play into the 'final girl' trope. Instead, she creates a fulfilling life in NYC. Then, a woman like her dies of an apparent suicide, and Quincy's well-crafted facade gradually begins to unravel. This one will keep you guessing until the very last page.”—PureWow

“Final Girls is a twisty horror novel that will keep you perched, terrified, at the edge of your seat until the very last page.”—Bustle

“Sager quickly ratchets up the mystery and the psychological suspense in classic slasher-movie fashion . . . [and] takes time to delve into the head of the main character, creating an emotionally charged experience readers won’t soon forget.”—BookPage

“The tone of this book is absolutely spot on—more Dark Places than Gone Girl—but it’s creepy as hell and it evokes the best qualities of ’80s slasher movies.”—Book Riot

“Far and away the best thriller that came out this year.”—PopSugar

“Final Girls is the reason they came up with the term ‘page-turner.’ ”—PopHorror

“Readers won’t want to put this intense thriller down on the beach blanket—though that blanket may come in handy for hiding under during some of the book’s scarier moments.” —The Deseret News

“The Final Girls need you. You must sit down with this book, you must read. You must start flipping pages, faster, faster, faster. The Final Girls are tough, everything survivors should be. But the new threat is clever, ominous, even closer than you suspect. You are about to gasp. You might drop the book. You may have to look over your shoulder. But you must keep reading. This is the best book of 2017, the Final Girls need you.”—Lisa Gardner, New York Times bestselling author of Find Her

“Final Girls is a compulsive read, with characters who are at once unreliable and sympathetic. Just when you think you've figured out the plot, the story pivots in a startling new direction. . . . A taut and original mystery that will keep you up late trying to figure out a final twist that you won't see coming.”—Carla Norton, bestselling author of The Edge of Normal and What Doesn't Kill Her

“Part psychological thriller, part homage to slasher flicks and film noir, Final Girls has a little bit of everything: a suspicious death, a damaged heroine, an unwelcome guest who trades in secrets, and not a single character you can trust. Plenty of nail-biting fun!”—Hester Young, author of The Gates of Evangeline

“There are uncommon books and films that crack the ‘safe place,’ that have us forgetting it’s only a story. Nobody knows exactly how this is done, but when it’s done, we know it. Final Girls is operating on that plane; you will check your own arm for a wound a character suffers, you will look across the room when a character hears someone coming, and you will wonder if you yourself have the mettle to endure being a Final Girl.”—Josh Malerman, author of Bird Box

“Smart and provocative, with plenty of twists and turns, Final Girls will have the reader racing breathlessly toward its shocking conclusion.”—Sophie Littlefield, award-winning author of The Guilty One and The Missing Place

“Phenomenally drawn characters and an intriguing premise make this one of my favorite books I've read this year. An outstanding novel.”—Hollie Overton, bestselling author of Baby Doll

“Captivating and compelling, with a refreshingly brilliant premise, Riley Sager is one to watch.”—Lisa Hall, bestselling author of Between You and Me and Tell Me No Lies

“An intriguing, original idea. We’ve all shuddered at bloodbath stories—but how does the survivor cope? It made me think outside the psychological box. Fresh voice, great characterization, and unexpected surprises. This stayed in my mind because it was different.”—Jane Corry, Sunday Times bestselling author of My Husband's Wife