The Masterpiece: A Novel (Paperback) 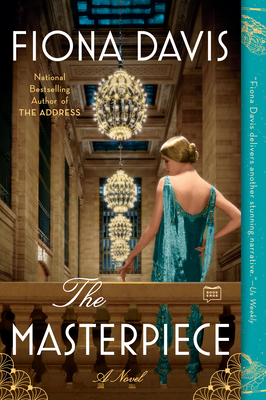 For most New Yorkers, Grand Central Terminal is a crown jewel, a masterpiece of design. But for Clara Darden and Virginia Clay, it represents something quite different.

For Clara, the terminal is the stepping stone to her future. It is 1928, and Clara is teaching at the lauded Grand Central School of Art. Though not even the prestige of the school can override the public's disdain for a "woman artist," fiery Clara is single-minded in her quest to achieve every creative success—even while juggling the affections of two very different men. But she and her bohemian friends have no idea that they'll soon be blindsided by the looming Great Depression...and that even poverty and hunger will do little to prepare Clara for the greater tragedy yet to come.

By 1974, the terminal has declined almost as sharply as Virginia Clay's life. Dilapidated and dangerous, Grand Central is at the center of a fierce lawsuit: Is the once-grand building a landmark to be preserved, or a cancer to be demolished? For Virginia, it is simply her last resort. Recently divorced, she has just accepted a job in the information booth in order to support herself and her college-age daughter, Ruby. But when Virginia stumbles upon an abandoned art school within the terminal and discovers a striking watercolor, her eyes are opened to the elegance beneath the decay. She embarks on a quest to find the artist of the unsigned masterpiece—an impassioned chase that draws Virginia not only into the battle to save Grand Central but deep into the mystery of Clara Darden, the famed 1920s illustrator who disappeared from history in 1931.

Fiona Davis is the New York Times bestselling author of five novels, including The Dollhouse, The Address, and The Lions of Fifth Avenue. She lives in New York City and is a graduate of the College of William & Mary in Virginia and the Columbia Journalism School.

Praise for The Masterpiece
“How could I not adore a book set in New York City, my favorite city in the world? A soaringly smart page-turner about art, history, memory, and how two blazingly unique women, separated and yet bound together by different decades, struggle to find their place and make their world their own. Magnificent.” -- Caroline Leavitt, New York Times Bestselling Author of Pictures of You and Cruel Beautiful World

"Bursting with delicious period detail, in The Masterpiece Fiona Davis takes us behind the scenes of New York's Grand Central Terminal to reveal a forgotten world of art and intrigue. Oozing with sophistication and packed with a delicious cast of characters (including the building itself), this is a hugely enjoyable and cleverly crafted historical novel." -- Hazel Gaynor, New York Times bestselling author of The Cottingley Secret

"An enthralling tale of love and art, lost and found. Fiona Davis has written another beautiful valentine to New York City, this one about two women, fifty years apart, both struggling and fighting to find themselves in a time and place not always kind to the displaced or lonely. A fascinating, tender, mysterious and ultimately deeply satisfying novel." –- M.J. Rose, New York Times bestselling author of Tiffany Blues

With her two previous novels, The Address and The Dollhouse, Fiona Davis established herself as the master of plumbing the depths of New York’s landmarks for the secrets that lie beneath. Now in The Masterpiece, Davis turns her talents to Grand Central Terminal, with a powerful dual narrative about an artist who taught at a prestigious art school in the station in the 1920s and a single mother working at Grand Central in the 1970s who discovers the remains of the art school. Davis seamlessly weaves the compelling narratives of these women against a backdrop of vivid historic detail, once again setting the standard for bringing New York’s past to life.  --Pam Jenoff, New York Times Bestselling Author of The Orphan’s Tale

“Riveting, sophisticated, and utterly sublime, The Masterpiece is an exquisite novel, as smart as it is beautifully written.” –New York Times Bestselling Author Tasha Alexander

“A wonderfully woven story of two women separated by time but linked by their love of beauty expressed in art and their determination to save what they simply can’t live without. Expertly researched and detailed, here is a book for devotees of historical fiction, the art world, and all things Manhattan.” --Susan Meissner, bestselling author of As Bright as Heaven

“With The Masterpiece, Fiona Davis returns with another page-turning tale of that will transport readers, this time centered around New York City’s magnificent and storied Grand Central Terminal. Fiona Davis’ signature blend of past and present, history and architecture, secrets and discovery make every novel a must-read. With strong female characters, exquisite historical detail, and plenty of intrigue, The Masterpiece will delight!” –Jamie Brenner, bestselling author of The Forever Summer and others

“Fiona Davis is a master of making the past come roaring to life with rich and luxurious detail. The Masterpiece is her best yet. With formidable women, dazzling prose, and the glamorous backdrops of the New York art scene in the 20s and 70s, this is a must-read.” -Taylor Jenkins Reid, author of The Seven Husbands of Evelyn Hugo


"In a story as masterful as its title, Fiona Davis paints a captivating picture of the once famous art school in New York City's iconic Grand Central and its brilliant female artist, interweaving this little-known past with New York City of the 1970s where another woman works to preserve the legendary structure from potential destruction. As the women at the heart of The Masterpiece rescue Grand Central and its art, they rescue themselves in a compelling demonstration of the way in which history reverberates in the present." -Marie Benedict, author of The Other Einstein and Carnegie's Maid


More praise for Fiona Davis and Her Novels:
"A delicious tale of love, lies and madness."--People on The Address

"Lively and detail rich--set against the backdrop of NYC's infamous Dakota building--with a thread of mystery that makes it easy to enjoy, hard to put down."--Family Circle

“Rich both in twists and period detail, this tale of big-city ambition is impossible to put down.”—People on The Dollhouse

“An ode to old New York that will have you yelling for more seasons of Mad Men.”—New York Post on The Dollhouse