The Address: A Novel (Paperback) 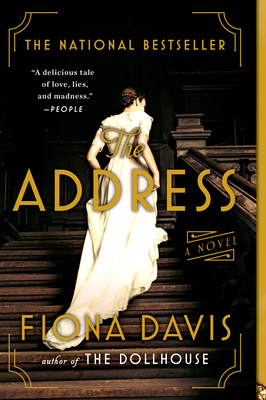 “Like in her debut, The Dollhouse, Fiona Davis meshes historical fiction, thriller, mystery, and love story in her sophomore novel, moving back and forth between the late 1800s and the mid-1980s and putting her own juicy and highly readable literary spin on classic 'women's' fiction, this time set in New York's storied and infamous Upper West Side apartment building The Dakota. The Address juxtaposes the stories of two women whose lives are disrupted, in danger, and intertwined through circumstances the reader progressively learns more about during the course of the novel. There's illicit love, an illegitimate child, drug abuse, a mysterious murder weapon, wealthy wrong-doers, a severed finger, a stay in an insane asylum, and a guest appearance by none other than famed feminist reporter Nelly Bly! Plus the hulking Dakota, which is gorgeous and lavish and reeking of secrets, many of them deadly.”
— Joy Preble, Brazos Bookstore, Houston, TX

From the author of The Dollhouse and The Masterpiece comes the compelling national bestselling novel about the thin lines between love and loss, success and ruin, passion and madness, all hidden behind the walls of The Dakota—New York City’s most famous residence.

When a chance encounter with Theodore Camden, one of the architects of the grand New York apartment house the Dakota, leads to a job offer for Sara Smythe, her world is suddenly awash in possibility—no mean feat for a servant in 1884. The opportunity to move to America. The opportunity to be the female manager of the Dakota. And the opportunity to see more of Theo, who understands Sara like no one else...and is living in the Dakota with his wife and three young children.

One hundred years later, Bailey Camden is desperate for new opportunities: Fresh out of rehab, the former interior designer is homeless, jobless, and penniless. Bailey's grandfather was the ward of famed architect Theodore Camden, yet Bailey won't see a dime of the Camden family's substantial estate; instead, her “cousin” Melinda—Camden's biological great-granddaughter—will inherit almost everything. So when Melinda offers to let Bailey oversee the renovation of her lavish Dakota apartment, Bailey jumps at the chance, despite her dislike of Melinda's vision. The renovation will take away all the character of the apartment Theodore Camden himself lived in...and died in, after suffering multiple stab wounds by a former Dakota employee who had previously spent seven months in an insane asylum—a madwoman named Sara Smythe.

A century apart, Sara and Bailey are both tempted by and struggle against the golden excess of their respective ages--for Sara, the opulence of a world ruled by the Astors and Vanderbilts; for Bailey, the nightlife's free-flowing drinks and cocaine—and take refuge in the Upper West Side's gilded fortress. But a building with a history as rich, and often as tragic, as the Dakota's can't hold its secrets forever, and what Bailey discovers inside could turn everything she thought she knew about Theodore Camden—and the woman who killed him—on its head.

Fiona Davis is the nationally bestselling author of The Masterpiece, The Dollhouse, and The Address. She lives in New York City and is a graduate of the College of William and Mary in Virginia and the Columbia Journalism School.

Praise for The Address

“A delicious tale of love, lies and madness.”—People Magazine

“Lively and detail rich—set against the backdrop of NYC’s infamous Dakota building—with a thread of mystery that makes it easy to enjoy, hard to put down.”—Family Circle

“Fiona Davis again proves she is the master of the unputdownable novel.”—Redbook

“If you’re a historical fiction lover, we can’t recommend The Address enough. It has an unparalleled attention to character and detail, and will transport you back in time to New York City faster than you can say ‘The Dakota.’”—Hellogiggles.com

“On the heels of last year’s The Dollhouse—about life at the Barbizon Hotel—Fiona Davis is back with a compelling novel about two women, a century apart, who both find their lives forever changed by the Dakota, Manhattan’s most famous apartment building.”—Town & Country

“An unforgettable, centuries-spanning tale of life and love in The Dakota, NYC's most famous apartment house.”—SouthernLiving.com

“Davis' characters will remind readers that sometimes, we have more in common with strangers than we think.”—Real Simple

“Historically rich and poignant on matters of gender, social and economic in­equality, The Address is old New York at its finest.”—PureWow

“Fiona Davis delivers her fans a richly layered historical plot that explores the stories and rumors of one of Manhattan’s most prestigious residences: The Dakota. From socialites to failed careers to amazing characters never to be forgotten, this is one of 2017’s most glorious NY-based tales and needs to be enjoyed before summer ends.”—Brit + Co

“Let this evocative novel sweep you away to another time and place.”—POPSUGAR

“With her nimble writing style, Davis makes pithy commentary on gender, social and economic in¬equality in both eras... This thought-provoking book makes you wonder what Edith Wharton would have made of these Camdens and pseudo-Camdens. Thankfully, Davis is here to tell us.”—BookPage

“An evocative and intriguing story of love, class, secrets, and pasts, The Address  tells the tale of two very different working women who lived almost a hundred years apart and the mystery that may or may not connect them and link their fates.  Set at one of the most historic and glamorous apartment buildings in Manhattan, the book is this summer's perfect beach read.”—Wendy Lawless, New York Times bestselling author of Chanel Bonfire and Heart of Glass

“The Address transported me through the grand doors of the Dakota building, and right into the hearts of its inhabitants. Rich in historic glamour and hugely enjoyable.”—Eve Chase, author of Black Rabbit Hall and The Wilding Sisters

“A superb tale, masterfully told, with splendid detail and historical accuracy.”—Andrew Alpern, author of The Dakota: A History of the World’s Best-Known Apartment Building

“Fiona Davis has a genuine flair for deftly created and memorable characters and the use of historical detail to skillfully engage the readers full attention.”—Midwest Book Review

Praise for The Dollhouse

“An ode to old New York that will have you yelling for more seasons of Mad Men.”—New York Post

“In her page-turning debut, Fiona Davis deftly weaves the storylines of two women living at the famed Barbizon hotel for women....Davis alternates the chapters between each woman until the twists and turns of their respective storylines ultimately weave together, upping the anticipation along the way.”—RealSimple

“This suspenseful novel about a woman who took a decidedly different path—and the journalist who wants to uncover her secrets—will quicken your pulse.”—InStyle

“Davis layers on relationships and intrigue, while building tension through her story structure....The pace quickens as the story hurtles to its surprising—but satisfying—end. Who said history had to be dull, anyway?”—BookPage

“Fiona Davis’s debut novel deftly blends the contemporary and midcentury storylines to form a wholly absorbing and entertaining read....Period fiction mingled with twists and turns that keep the reader engrossed until the very last page.”—Bookreporter.com

“Davis’s debut novel...[is] a lively one, tripping along at a sprightly clip.”—Kirkus Reviews

“Get ready for glitz, glamour, and a whole lot of sleuthing.”—Brit + Co

“Sensory and vivid....A zippy plot and [a] refreshing focus on the lives of women many would overlook.”—The Dallas Morning News

“Highly readable, The Dollhouse conjures up 1950s New York convincingly. In particular the now-vanished world of the Barbizon Hotel for Women, with its antiquated rules and intriguing array of female personalities and tragic fates, lives on in the pages of the novel in delectable detail....This is no mere ‘chick-lit,’ but feminist-inspired entertainment.”—Historical Novel Society

“Fans of Suzanne Rindell’s Three-Martini Lunch will enjoy this debut’s strong sense of time and place as the author brings a legendary New York building to life and populates it with realistic characters who find themselves in unusual situations.”—Library Journal

“The ghosts of the famed NYC women's hotel come to life in The Dollhouse. Davis expertly weaves together the stories of several women who lived in the Barbizon during its heyday in the 1950s, and the broken-hearted journalist who decides to get the ‘scoop’ on a decades-old tragedy that happened in the building. A fun, page-turning mystery.”—Suzanne Rindell, author of The Other Typist and Three-Martini Lunch

“Multigenerational and steeped in history, The Dollhouse is a story about women—from the clicking anxiety of Katie Gibbs's secretaries to the willowy cool of Eileen Ford's models, to honey-voiced hatcheck girls and glamorous eccentrics with lapdogs named Bird. Davis celebrates the women of New York's present and past—the ones who live boldly, independently, carving out lives on their own terms.”—Elizabeth Winder, author of Pain, Parties, Work: Sylvia Plath in New York, Summer 1953

“Two coming-of-age stories rolled into an ode to New York City and the young women—of past and present—who have tried to forge lives and careers there. Poetic, romantic, crushing, and soulful.”—Jules Moulin, author of Ally Hughes Has Sex Sometimes