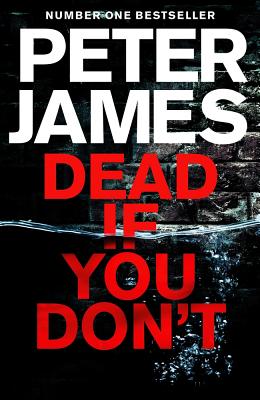 This is book number 14 in the Roy Grace series.

Shortly after Kipp Brown and his teenage son, Mungo, arrive at the stadium for their team’s biggest-ever football game, Mungo disappears. A short while later Kipp receives a text with a ransom demand and a warning not to go to the police if he and his wife want to see their son alive again. But as a massive, covert manhunt for the boy and his kidnappers begins, Detective Superintendent Roy Grace starts to realize that not all is what it seems.

Peter James is the international bestselling author of many award-winning novels. His Detective Superintendent Roy Grace series has been translated into 37 languages with worldwide sales of over 18 million copies. In 2016 he became the recipient of the coveted CWA Diamond Dagger lifetime achievement, awarded for sustained excellence. Peter has also written a short story collection, A Twist of the Knife, and his standalone titles include his ghost story The House On Cold Hill and The Perfect Murder, which has been turned into a popular stage play.

"In my thirty four years of policing, never have I come across a writer who so accurately depicts 'The Job'." —Detective Investigator Pat Lanigan, Office of the District Attorney, NYPD

“Grace is a detective known for his human touch.” —New York Times on Need You Dead

"This skillful twister shows why James was awarded the 2016 CWA Diamond Dagger." —Publishers Weekly starred review of Need You Dead

"Immensely satisfying. . . . James juggles his multiple story lines with panache as the action hurtles to a shattering conclusion." —Publishers Weekly starred review of Love You Dead

"James is a master of constructing the kind of plot that twists and turns, ensnaring the reader in its grasp." —Booklist on Love You Dead

"Grace is a detective known for his human touch."—The New York Times

“The international phenomenon that is Peter James is back.”—CrimeReads