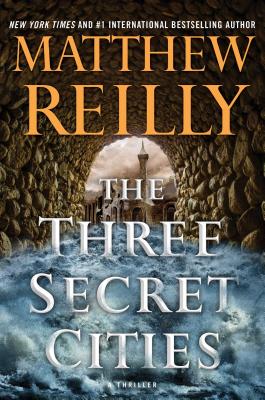 This is book number 5 in the Jack West, Jr. series.

A shadow world behind the real world

When Jack West, Jr. won the Great Games, he threw the four legendary kingdoms into turmoil.

A world with its own history, rules and prisons

Now these dark forces are coming after Jack...in ruthless fashion.

That is reaching into our world...explosively

With the end of all things rapidly approaching, Jack must find the Three Secret Cities, three incredible lost cities of legend.

It’s an impossible task by any reckoning, but Jack must do it while he is being hunted...by the greatest hunters in history.

Matthew Reilly is the New York Times and #1 international bestselling author of numerous novels, including The Four Legendary Kingdoms, The Tournament, The Great Zoo of China, The Five Greatest Warriors, The Six Sacred Stones, Seven Deadly Wonders, Ice Station, Temple, Contest, Area 7, Scarecrow, and Scarecrow Returns, as well as the children’s book Hover Car Racer and the novella Hell Island. His books have been published in more than twenty languages in twenty countries, and he has sold more than 7.5 million copies worldwide. Visit him at MatthewReilly.com and at Facebook.com/OfficialMatthewReilly.

“Relentless….fantastic….[A] clever mix of history, mythology, and geography make this one of the best action-thrillers published in the past few years….Will make a reader’s heart race….This novel is the perfect ‘beach read’ for the upcoming winter months.”