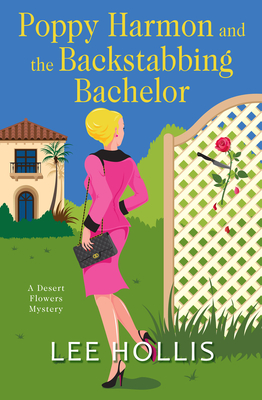 This is book number 4 in the A Desert Flowers Mystery series.

Private Investigator Poppy Harmon can see through the charms of Southern California’s trickiest criminals. But when she and the Desert Flowers Detective Agency go up against a dashing dating show killer, they may have finally met their match!

While sidekick Matt Flowers shoots a film abroad, Poppy dusts off her own acting chops to break up a Gen Z crime ring targeting seniors in Palm Springs.  Tanya Cook and her gal pals have been swindling susceptible residents for all they’re worth—until the gang meets Poppy undercover. Yet with the case cracked, the desert heat is on full blast as new terrors take the lead…

Poppy’s already sweating over a menacing mystery stalker when a shocking death proves she’s in serious danger. As suspicions fall once again on Tanya, finding answers may mean pulling off the most challenging performance of her career…

Now, with Poppy’s unknown stalker rumored to be posing as one of several bachelors on a glitzy reality series, a disguised Poppy must reveal his true identity on set before he realizes hers. Does Poppy have what it takes to catch the cold-blooded killer in time for the season finale…or should she start planning for her funeral?

Lee Hollis, the pen name for Rick Copp, is the author of the Desert Flowers Mysteries and the Maya and Sandra Mystery Series. He is also the co-author of the Hayley Powell Food & Cocktail Mysteries with his sister, Holly Simason. A veteran Hollywood screenwriter, he is the co-writer of The Brady Bunch Movie and has written for numerous television series, including The Golden Girls, Wings, Scooby-Doo, Teen Titans, and Barbershop. He also produces, writes, and stars in the hit web series Where the Bears Are. He lives in Palm Springs, California and can be found online at LeeHollisMysteries.com.