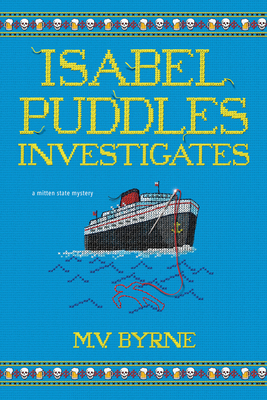 This is book number 2 in the A Mitten State Mystery series.

“Too late” isn’t a factor for Isabel Puddles—until the clock starts ticking on a deadly mystery in the cozy town of Gull Harbor, Michigan...

Isabel is living life on her terms as summer stirs the peaceful shores of Lake Michigan. Only slowing down to meet her oldest friend for daily coffee, the newly licensed PI has found herself chipping away at the college degree she never completed—and, to her surprise, eagerly awaiting letters from her pen pal, an admired British mystery writer. But when her latest client turns out to be an extravagant recluse who’s rich both in secrets and money, Isabel becomes embroiled in the strange world of Rust Belt royalty and the Memorial Day Weekend disappearance of a handsome young heir.

Beyond the famous family name and ugly rumors surrounding her, Abigail Bachmeier is an enigma. With one great nephew presumed dead after vanishing off the side of a ferry, Abigail makes the strange request to locate another missing relative. As Isabel investigates and gets closer to revealing at least one more possible murder, she begins to suspect yet another life could soon be in terrible danger—her own.

M.V. Byrne was born in East Lansing, Michigan and grew up in the San Francisco Bay Area, although he spent his summers on Lake Michigan with family. He later returned to East Lansing to attend Michigan State University. After years of living in both NYC and LA, he has settled in LA full time where he continues to work as a writer/producer in unscripted TV, though he can now add the job title of “Author” to his resume. He’s currently working on the next Isabel Puddles Mystery. He can be found online at MVByrne.com.