Watch Her: A Gripping Novel of Suspense with a Thrilling Twist (A Hester Thursby Mystery #3) (Hardcover) 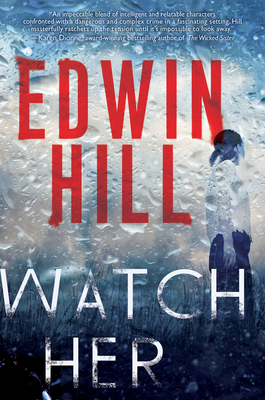 This is book number 3 in the A Hester Thursby Mystery series.

Fans of Ruth Ware and B.A. Paris won't want to miss this complex psychological thriller from an acclaimed author about a powerful Boston family desperate to keep their darkest secrets from coming to light.

While attending a gala at Prescott University's lavish new campus, Hester Thursby and fellow guest, Detective Angela White, are called to the home of the college's owners, Tucker and Jennifer Matson. Jennifer claims that someone broke into Pinebank, their secluded mansion on the banks of Jamaica Pond. The more Hester and Angela investigate, the less they believe Jennifer's story, leaving Hester to wonder why she would lie.

When Hester is asked by the college's general manager to locate some missing alumni, she employs her research skills on the family and their for-profit university. Between financial transgressions, a long-ago tragedy, and rumors of infidelity, it's clear that the Matsons aren't immune to scandal or mishap. But when one of the missing students turns up dead, the mystery takes on new urgency.

Hester is edging closer to the truth, but as a decades-old secret collides with new lies, a killer grows more determined to keep the past buried with the dead. . . .

"Hits that elusive sweet spot yet again with an impeccable blend of intelligent and relatable characters confronted with a dangerous and complex crime in a fascinating setting. Hill masterfully ratchets up the tension until it's impossible to look away. Hester Thursby fans will not be disappointed!" --Karen Dionne, award-winning bestselling author of The Wicked Sister

Edwin Hill is the author of the critically-acclaimed Hester Thursby mystery series, the first of which, Little Comfort, was an Agatha Award-finalist, a selection of the Mysterious Press First Mystery Club and a Publishers Marketplace Buzz Books selection. The second installment, The Missing Ones, was also an Agatha Award-finalist and a Sue Grafton Memorial Award nominee. Formerly the vice president and editorial director for Bedford/St. Martin's (Macmillan), he now teaches at Emerson College and has written for the LA Review of Books, The Life Sentence, Publishers Weekly, and Ellery Queen Mystery Magazine. He lives in Roslindale, Massachusetts with his partner Michael and their Labrador, Edith Ann. Visit him online at Edwin-Hill.com.

Praise for Watch Her

“Complex characterization and a masterly mystery make this a superior read.”
—Kirkus Reviews

Praise for Edwin Hill and the Hester Thursby Novels

“Addressing the impact of illegal drug dealing and use, this whodunit has broken family dynamics and a wonderfully complex and intricate mystery, plenty to engage readers looking for a new amateur detective to follow.”
—Library Journal, STARRED REVIEW for The Missing Ones

“Thursby is a tough, cerebral, relatable flawed sleuth who lulls herself to sleep with horror films and takes on serial killers and unexpected motherhood without skipping a beat. A dark but compassionate psychological-thriller debut with great appeal for fans of Ruth Ware and Cornelia Read.”
—Booklist, STARRED REVIEW on Little Comfort

“Intense…Hill is adept at building compassion for his characters in a tight-knit social web while implicating them in dark thoughts and actions. He remains a writer to watch.”
—Publishers Weekly on The Missing Ones

“A conflicted protagonist battles formidable opponents in a bid for a normal life.”
—Kirkus Review on The Missing Ones

“Intense…Poignantly looks at the fragility of emotional health and the pitfalls of trying to make a fresh start…Hill’s affinity for creating realistic characters with complicated personalities and suspenseful plots shines.”
—The Associated Press on The Missing Ones

“A complex mystery with well-defined characters, a detailed plot, and suspense that tightens like a vise…The Missing Ones’ sprawling, but effective, plot is built around its characters…Hill’s expert rendering of [Hester’s] emotional state makes her relevant and interesting. The climactic scenes have their share of surprises, but for The Missing Ones, the emotional impact of the characters is as important as the mystery.”
—Mystery Scene on The Missing Ones

“[Hill] commands our attention as a rising star in the mystery genre.”
—The New York Journal of Books

“The Missing Ones is a resounding triumph that reaffirms Edwin Hill’s emergence as a fierce new voice in crime fiction.”
—Criminal Element

“A brilliantly composed mystery…a hurricane of suspense with squalls of twists that’ll just take your breath away. A salty, stormy and seductive read.”
—Mario Giordano, author of Auntie Poldi and The Vineyards of Etna on Little Comfort

“Hill's debut is a chilling psychological thriller with an unusual heroine and a page-turning storyline.”
—Kirkus Reviews on Little Comfort

“A fascinating psychological thriller that gets deep under your skin.”
—The Strand Magazine on Little Comfort

“In his compelling debut, Edwin Hill spins layer upon layer of intrigue as Hester Thursby, in the business of finding people who don’t want to be found, takes on a job that turns out to be far more surprising and dangerous than she bargained for. This smart, complex, and suspenseful New England thriller will keep you turning pages far into the night.”
—Jessica Treadway, author of Lacy Eye and How Will I Know You? on Little Comfort

“Compellingly plotted and compulsively readable, Little Comfort will leave you a little uncomfortable in the best of ways. Hester Thursby, its powerhouse protagonist, is tough, intriguingly flawed and complex. Edwin Hill’s first effort is certain to be among the year’s best debuts.”
—John Keyse-Walker, author of Beach, Breeze, Bloodshed on Little Comfort

“A chilling mix of envy, deceit, and murder. Everyone is lying about something in this tense, stylish debut novel…will have you frantically turning pages until the final, breathless climax.”
—Joanna Schaffhausen, author of The Vanishing Season on Little Comfort

“Little Comfort isn’t just the arrival of a fantastic new book, but also marks the emergence of a spectacular writer to watch. This story had me hooked from the first chapter, and my nails bitten to the nub before I was halfway through. Watch out! Little Comfort delivers just what the title promises.”
—Bracken MacLeod, author of Stranded and 13 Views of the Suicide Woods