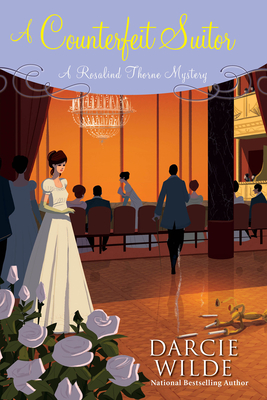 This is book number 5 in the Rosalind Thorne Mystery series.

Among the ton of Regency London, one breath of scandal can be disastrous. Enter Rosalind Thorne in this charming mystery series inspired by the novels of Jane Austen and compared to a 19th century Phoebe Waller-Bridge from “Fleabag.” Charming and resourceful, she is a woman adept at helping ladies of quality navigate the most delicate problems and privy to the secrets of high society—including who among the ton is capable of murder...

“Wilde's heroine is not only a useful woman but a highly entertaining one.”
—Kirkus Reviews

It is every mama’s dearest wish that her daughter marries well. But how to ensure that a seemingly earnest suitor is not merely a fortune hunter? Rosalind is involved in just such a case, discreetly investigating a client’s prospective son-in-law, when she is drawn into another predicament shockingly close to home.

Rosalind’s estranged father, Sir Reginald Thorne—a drunkard and forger—has fallen into the hands of the vicious scoundrel Russell Fullerton. Angered by her interference in his blackmail schemes, Fullerton intends to unleash Sir Reginald on society and ruin Rosalind. Before Rosalind’s enemy can act, Sir Reginald is found murdered—and Fullerton is arrested for the crime. He protests his innocence, and Rosalind reluctantly agrees to uncover the truth, suspecting that this mystery may be linked to her other, ongoing cases.

Aided by her sister, Charlotte, and sundry friends and associates—including handsome Bow Street Runner Adam Harkness—Rosalind sets to work. But with political espionage and Napoleon loyalists in the mix, there may be more sinister motives, and far higher stakes, than she ever imagined...

“Rosalind carries the soul of Sherlock Holmes in the world of Elizabeth Bennet, and it’s a hard combination to beat.”
—BookPage

"A complex, enthralling mystery that rivals those of Anne Perry and Agatha Christie.”
—New York Journal of Books

“Clever and witty. Wilde artfully portrays Regency London, from its ballrooms to Bow Street, in all its glory and hypocrisy, and provides readers with a heroine worthy of our attention. With its colorful cast and scandalous intrigue, A Useful Woman would surely have set the famed patronesses of Almack’s atwitter.”
—Anna Lee Huber, national bestselling author of the Lady Darby Mysteries

“The Regency frame is skillfully woven through a story that features surprising plot twists and an engaging subplot concerning Rosalind’s dilemma over whom to marry—Harkness or a duke who will allow her to reclaim her past.”
—Booklist

“Captivating. . . . Wilde smoothly mixes historical figures and events into a plot that’s sure to keep readers turning the pages to see what happens next. Regency fans will be charmed.”
—Publishers Weekly

“Rosalind is an interesting, dare I say ‘plucky’ heroine, a once-rich girl now lowered to live by her wits. She still follows the strict etiquette of her time and lost position, no matter the cost. The asides on what is proper in each situation are amusing, reminiscent of Jane Austen . . . I thoroughly enjoyed this novel and look forward to the next book in the series.”
—The Historical Novel Society