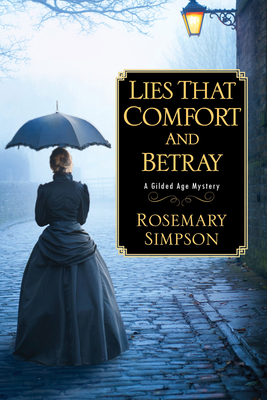 This is book number 2 in the Gilded Age Mystery series.

From the author of What the Dead Leave Behind, this suspenseful and richly atmospheric mystery captures both the elegance and sophistication of New York’s Gilded Age—and the secrets and bloody terrors that lurk behind its elegant facades . . .

Heiress Prudence MacKenzie is a valuable partner to attorney Geoffrey Hunter, despite the fact that women are not admitted to the bar in nineteenth-century New York. And though their office is a comfortable distance from the violence of the city’s slums, the firm of Hunter and MacKenzie is about to come dangerously close to a high-profile killer across the pond . . .

Nora Kenny works in Prudence’s Fifth Avenue house, just as her mother once served Prudence’s mother. As children, they played freely together, before retreating into their respective social classes. Still, they remain fond of each other. So when Nora’s body is discovered in a local park, Prudence is devastated. As other poor, vulnerable young women fall victim, the police are confounded. Has the Ripper crossed the Atlantic to find a new hunting ground? Is someone copying his crimes? A former Pinkerton agent, Geoffrey intends to step in, and Prudence is equally determined. But a killer with a disordered mind and an incomprehensible motive may prove too elusive for even this experienced pair to outwit.

Praise for What the Dead Leave Behind

“Simpson's debut, first in a planned series, features complex characters, a vivid look at old New York in the late 1800s, and a mystery with a twist.” —Kirkus Reviews

“This is a story to savor . . . Prudence is a stubborn, quick-witted American heroine who will remind readers of Tasha Alexander’s Lady Emily Ashton and Deanna Raybourn’s Lady Julia Grey.” –Booklist

Rosemary Simpson is the author of two previous historical novels The Seven Hills of Paradise and Dreams and Shadows, and a previous Gilded Age Mystery, What the Dead Leave Behind. She is a member of Sisters in Crime, International Thriller Writers, and the Historical Novel Society. Educated in France and the United States, she now lives near Tucson, Arizona.