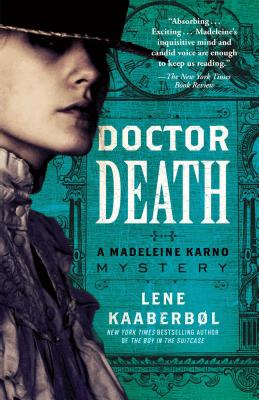 The critically acclaimed New York Times bestselling coauthor of The Boy in the Suitcase draws you into a “gripping” (Publishers Weekly, starred review) mystery from the very first line of this page-turning historical thriller featuring an ambitious young female detective challenging the mores of nineteenth century France.

Strong-minded and ambitious, Madeleine Karno is eager to shatter the constraints of her provincial French upbringing. She longs to become a pathologist like her father, whom she assists, but this is 1894. Autopsies are considered unseemly and ungodly, even when performed by a man.

So it’s no surprise that when seventeen-year-old Cecile Montaine is found dead in the snowy streets of Varbourg, her family will not permit a full postmortem autopsy, and Madeleine and her father are left with a single mysterious clue. Soon after, the priest who held vigil by the dead girl’s corpse is brutally murdered. The thread that connects these two events is a tangled one, and as the death toll mounts, Madeleine must seek knowledge in odd places: behind convent walls, in secret diaries, and in the yellow stare of an aging wolf.

Eloquently written and with powerful insight into human and animal nature, Doctor Death is at once a captivating mystery and a poignant coming-of-age story.

Lene Kaaberbøl, the New York Times bestselling author of Doctor Death, has sold more than two million books worldwide. She has won several awards for her fiction, including a nomination for the Hans Christian Andersen medal. Her work has been translated into more than thirty languages. Kaaberbøl is the coauthor of the New York Times bestseller The Boy in the Suitcase. Kaaberbøl, born in Copenhagen, now lives on the Channel Island of Sark.

“Deftly exploring such themes as the struggles between mind and body, science and spirit—without detracting from a gripping plot—the novel transcends its period to contemplate the eternal.”

“Madeleine Karno is a sleuth both true to the period and rooted in strength of will, gumption, and ambition.”
— —Sarah Weinman, editor of Troubled Daughters, Twisted Wives

"Engrossing... Sure to please fans of historical mysteries.”

“Excellent . . . The author sucks the reader into a fascinating universe from page one.”

"This beautifully crafted story had me riveted from start to finish!... I will definitely be looking for more of Lene Kaaberbol’s books to add to my reading list.”

“Eloquently written and with powerful insight into human and animal nature.”

"Readers can only hope this is the first of many Madeleine installments."

“Madeline and the way that she handled the murkier parts of humanity mesmerized me.”

“If you're looking for a great historical, gothic-based mystery then this is the book you should grab.”

“Madeleine’s inquisitive mind and candid voice are enough to keep us reading.”

“A one-sit read […] made me a confirmed, and impatient, fan of what I hope will be a long-running series.”

“Right away I was drawn in by Danish author Lene Kaaberbol's descriptive prose.”

"The author has given us once more a strong main character that is both intelligent and willing to get her hands dirty.”

Praise for The Boy in the Suitcase

"Once you start reading, you can’t stop."

"[The] uniquely Scandinavian style sure to draw comparisons with a certain blockbuster trilogy (this is better).”

“Stieg Larsson fans will find a lot to like in The Boy in the Suitcase.”

"A debut that’s a model of finely tuned suspense.”

"Ready to be discovered by an American audience.”