Shadow of the Serpent: An Inspector McLevy Mystery 1 (Paperback) 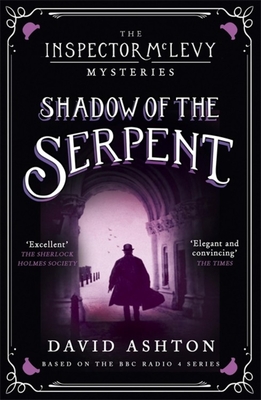 This is book number 1 in the Inspector McLevy series.


...WHILE THE STREETS OF LONDON HAD SHERLOCK HOLMES, THE DARK ALLEYS OF EDINBURGH HAD INSPECTOR JAMES McLEVY| 'ASHTON IS THE DIRECT HEIR TO ROBERT LOUIS STEVENSON' actor Brian Cox | 'EXCELLENT' The Sherlock Holmes Society | 'DRIPPING WITH MELODRAMA AND DERRING-DO' Herald ELEGANT AND CONVINCING' The Times

1880, Edinburgh.
Election fever grips the city. But while the rich and educated argue about politics, in the dank wynds of the docks it's a struggle just to stay alive. When a prostitute is brutally murdered, disturbing memories from thirty years ago are stirred in Inspector McLevy who is soon lured into a murky world of politics, perversion and deception - and the shadow of the serpent.

BASED ON THE LONG-RUNNING BBC RADIO 4 McLEVY DRAMA SERIES

DAVID ASHTON was born in Greenock in 1941.
He studied at Central Drama School, London, from 1964 to 1967, and most recently appeared in The Last King of Scotland and The Etruscan Smile. David started writing in 1984 and he has seen many of his plays and TV adaptations broadcast - he wrote early episodes of EastEnders and Casualty, and twelve McLevy series for BBC Radio 4.

Dripping with melodrama and derring-do—Herald

You can easily imagine the bustling life of a major port, and the stories are alive with a most amazing array of characters—BBC Radio 4

McLevy is one of the greatest psychological creations and Ashton the direct heir to Robert Louis Stevenson—Brian Cox, star of the BBC Radio 4 McLevy series

PRAISE FOR THE INSPECTOR McLEVY SERIES
Mclevy is a sort of Victorian Morse with a heart, prowling the mean wynds and tenements of the endlessly fascinating city. David Ashton impeccably evokes Edinburgh so vividly that you feel the cold in your bones and the menace of the Old Town's steep cobbles and dark corners