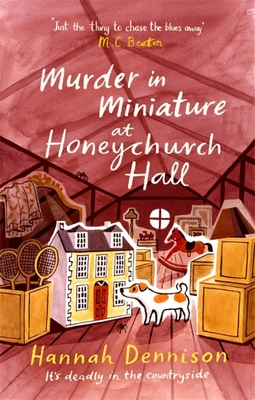 When a body found on the Honeychurch Hall estate proves to be that of a villager who had supposedly moved to Ireland years earlier, tongues start wagging and theories abound. Charlie Green had always been a rogue.

Although Charlie's demise happened well before Kat's arrival, Kat is drawn into the mystery when she finds two rare miniature portraits hidden inside a custom-made dollhouse of Honeychurch Hall. And then Charlie's aunt suffers a mysterious fatal fall and suspicion lands on a stranger who is holidaying in the newly installed shepherd's hut in the walled garden -- one of Lady Lavinia's latest hare-brained moneymaking schemes. Although there is something off about the tourist, Kat believes the culprit is fellow antique dealer.

With tales of blackmail, infidelity and greed gripping the small community, past and present collide and Kat realises that the miniatures harbour a vital secret that one particular person is willing to kill for.

Hannah Dennison was born and raised in Hampshire but moved to Los Angeles to pursue screenwriting more than two decades ago. She has been an obituary reporter, antique dealer, private jet flight attendant and Hollywood story analyst. Hannah writes the Honeychurch Hall Mystery Series and Vicky Hill Mystery Series, both of which are set in the wilds of the English countryside. She currently divides her time between California and the West Country.