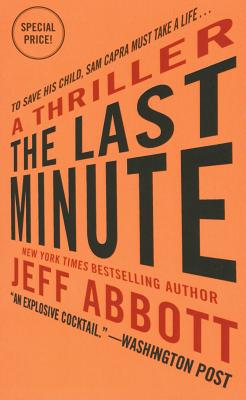 Sam Capra must commit an impossible assassination--or he will lose the only person in the world who matters to him . . .

Sam Capra has one reason to live: to rescue his baby son from the people who abducted him. An ex-CIA agent, Sam now owns bars around the world as cover for his real mission-working undercover for a secret network as mysterious as it is powerful, while using his skills to find his child.

Now the kidnappers have offered a deadly deal: they'll surrender Sam's child...if Sam finds and murders the one man who can expose them. Teaming up with a desperate young mother whose daughter is also missing, Sam tracks his prey-and his son-across the country in a dangerous race against time, and must unravel a deadly conspiracy if he's to rescue the only person in the world that matters to him.

Jeff Abbott is the New York Times bestselling author of fourteen novels. He is the winner of an International Thriller Writers Award (for the Sam Capra thriller The Last Minute) and is a three-time nominee for the Edgar award. He lives in Austin with his family. You can visit his website at www.JeffAbbott.com.

"Abbott is one of the best thriller writers in the business, and he delivers action and complex characters in an explosive cocktail. The next Capra novel cannot come fast enough."—Associated Press

"Like Adrenaline, this is a fast-paced thriller with a likable, morally conflicted hero. Sam is in a difficult situation, seemingly forced to commit murder to find his son, and-this is a testament to Abbott's skills as a storyteller-we really don't know whether he will follow through. The book ends on an upbeat note, giving Sam a certain amount of closure. Still, let's hope Abbott isn't through with Sam. He's a very well drawn character, and it would be nice to see him again."—Booklist

"This is the second in the Capra series, and he hasn't slowed down. It has killings, betrayals, big-time conspiracies and action galore."—The Oklahoman