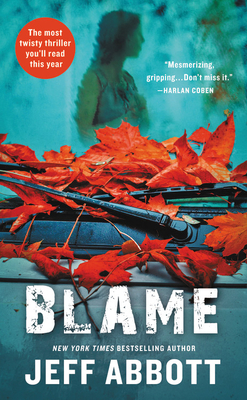 From "one of the best thriller writers in the business" (Associated Press) comes a novel praised by Harlan Coben as "mesmerizing, gripping...the perfect blend of complex characters, plot twists galore, and great psychological suspense."

Sometimes the person you thought you knew best...
Turns out to be someone you never really knew at all.

The crash that killed him
Two years ago, Jane Norton crashed her car on a lonely road, killing her friend David and leaving her with amnesia. At first, everyone was sympathetic. Then they found Jane's note: I wish we were dead together.

A girl to blame
From that day the town turned against her. But even now Jane is filled with questions: Why were they on that road? Why was she with David? Did she really want to die?

The secrets she should forget
Most of all, she must find out who has just written her an anonymous message: I know what really happened. I know what you don't remember...

Don't miss Jeff Abbott's most chilling thriller to date--perfect for readers of The Girl on the Train, Gone Girl, or The Woman in Cabin 10.

"If you like Harlan Coben, read this book. Taut, twisty, and elegantly-written, with an ending you won't see coming."--Sarah Pekkanen, bestselling author of The Perfect Neighbors

"Jeff Abbott is a master...I am, and always have been, a devoted fan."--Lisa Unger, New York Times bestselling author

Jeff Abbott is the New York Times bestselling author of seventeen novels. He is the winner of an International Thriller Writers Award (for the Sam Capra thriller The Last Minute) and is a three-time nominee for the Edgar award. He lives in Austin with his family. You can visit his website at www.JeffAbbott.com.

"I could not tear myself away from Jeff Abbott's mesmerizing, gripping, and claustrophobic novel. BLAME is the perfect blend of complex characters, plot twists galore, and great psychological suspense. Don't miss it."—Harlan Coben

"Blame is a masterful suspense novel, full of dread, lies, and deceptions. Abbott is one of our finest writers, and Blame takes his talents to new levels. Sinister and twisting, this is hands-down the best book you'll read--and re-read--this year. Absolutely top-notch."—J.T. Ellison, New York Times bestselling author

"Abbott does a stellar job...this story is in the hands of a true thriller master. And the payoff is glorious."—Associated Press


"[A] tense psychological thriller...The unconventional plot, the constant surprises, and above all the psychological depth of the characters all make this a first-rate crime novel."—Kirkus Reviews

"If you like Harlan Coben, read this book. Taut, twisty, and elegantly-written, with an ending you won't see coming."
—Sarah Pekkanen, bestselling author of The Perfect Neighbors

"Jeff Abbott is a remarkable writer and storyteller, and brings his skills to the realm of psychological suspense with this absolutely captivating book. Emotionally compelling, tense and packed with shocking plot twists, this book makes me have to use a word I hate: Unputdownable. I loved it."—Alison Gaylin, USA Today Bestselling Author of What Remains of Me


"Blame [is] the most addictive thriller of the summer...This book
belongs on that short list of novels that demand to be read in one
sitting...[and] will live on in reader's minds for a very long time to
come."—BOLO Books

"Last year, Harlan Coben's Fool Me Once was our highest-rated thriller of 2016. Abbot's BLAME is every bit as good and packs even more surprises along the way, leading up to a shocking ending that nobody, not even veteran readers of the genre, will ever see coming. Abbott's lightning-quick pacing and constant twists and turns make his latest offering impossible to put down. A one-sit read that'll have readers up way past their bedtimes, BLAME is Jeff Abbott's best novel so far--and a strong contender for best psychological thriller of the year."—TheRealBookSpy.com

"From the moment I set eyes on the viscerally magnetic Jane, I was spooked and positively riveted. Jeff Abbott proves, with this richly satisfying novel, that he is a master of suspense and tension."—Sara Blaedel, #1 internationally bestselling author of The Forgotten Girls


"Jeff Abbott is one of the most versatile authors in the crime fiction genre, and his broad story-telling talents are on full display in his latest thriller. The deeply psychological Blame has it all...Jeff Abbott is a master storyteller."—Mystery People


"Abbott is a master craftsman, an architect, Racehorse Haynes building a case for reasonable doubt, brick by brick. Blame left me shaking my head in admiration for his mad skills."—Lone Star Literary Life

"Jeff Abbott bundles raw emotions together and lights them on fire...Blame is a cut above the average thriller...a feat of pacing and timing."—Shelf Awareness (STARRED REVIEW)

"Lots of action and plot twists make this a literary roller coaster."—USA Today on Inside Man

"One of the best ongoing series in the thriller genre. Readers will be hooked from the start...INSIDE MAN jumps into the action right away, and the last 100 pages are downright terrifying. Abbott has a gift for creating great character-driven thrillers, and readers will clamor for more, especially given the cliffhanger ending."—Associated Press on Inside Man


"Bestseller Abbott packs a lifetime of thrills and suspense into a mere five days...Abbott excels at spinning complex webs of intrigue combining psychological twists and abundant action."—Publishers Weekly on Downfall

"Abbott knows how to slowly ratchet up the tension while maintaining great characters and terrific plot twists...The Sam Capra series gets better with each outing, and Downfall is a "must read" for the action-thriller fan."—Associated Press on Downfall

"Abbott is one of the best thriller writers in the business, and he delivers action and complex characters in an explosive cocktail. The next Capra novel cannot come fast enough."—Associated Press on The Last Minute

"Like Adrenaline, this is a fast-paced thriller with a likable, morally conflicted hero. Sam is in a difficult situation, seemingly forced to commit murder to find his son, and--this is a testament to Abbott's skills as a storyteller--we really don't know whether he will follow through. The book ends on an upbeat note, giving Sam a certain amount of closure. Still, let's hope Abbott isn't through with Sam. He's a very well drawn character, and it would be nice to see him again."—Booklist on The Last Minute

"Adrenaline has everything-relentless action, mind-bending intrigue, and twists and turns you won't see coming. It's exhilarating, and confirms Jeff Abbott as one of the best thriller writers of our time."—Harlan Coben

"This standalone novel is perfect for readers of The Girl on the Train, Gone Girl or The Woman in Cabin 10."—Waco Tribune-Herald