Eye for an Eye: A Dewey Andreas Novel (CD-Audio) 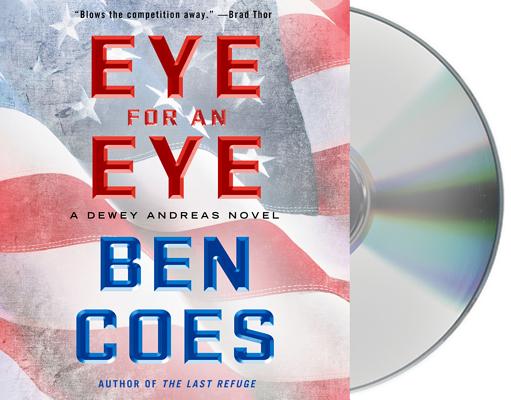 This is book number 4 in the A Dewey Andreas Novel series.

In Ben Coes' latest, Eye for an Eye, Dewey Andreas faces the toughest odds of his life as one of China's most powerful men has decided to do whatever he must to take down Dewey—and inflicts a horrifying loss.

When Dewey uncovers the identity of a mole embedded at a high level in Israel's Mossad, it triggers a larger, more dangerous plot. The mole was the most important asset of Chinese Intelligence, and Fao Bhang, head of China's Ministry of State Security (MSS), responds to the discovery and brutal elimination of the mole, by immediately placing a kill order on the man responsible—Dewey Andreas.

Dewey is tracked to Argentina, where he is on vacation with his fiancée, Jessica Tanzer, a U.S. National Security Advisor. A top-level kill team is sent in quickly and quietly, but their attack fails to take out Dewey. The collateral damage, however, is both horrifying and deeply personal. With nothing left to lose, Andreas is determined to have his revenge. Once he learns who is probably behind the attack—and why they are after him—Dewey goes rogue, using all of his assets and skills to launch a counterattack. Andreas must now face the full weight and might of the MSS, Chinese Intelligence, and the formidable Fao Bhang, if he's to achieve his one last goal: revenge on a biblical scale, no matter the odds or the armies that he will have to fight his way through. Andreas—former Army Ranger and Delta—is a man of great skills and cunning. His opponent, Fao Bhang, is ruthless, determined, and with no limit to the assets at his disposal.

In this conflict, there are only two possible outcomes. And only one Dewey Andreas.

“Heart-pounding...Coes is a master.” —Publishers Weekly

“Fiction that's frighteningly plausible and has the feel of authenticity on every page.” —Nashua Inquirer

“Exhilarating...You will want to take a stress test before reading Eye for an Eye. There are any number of suspenseful scenes between the covers.” —Bookreporter.com

“My favorite novel in at least a decade. The writing was inherently masculine, brilliantly crafted.” —Elizabeth Backney, Huffington Post, on THE LAST REFUGE

“Another winner from a writer who is a rising star among the ranks of the literary world's most successful authors of the international thriller.” —The Nashua Telegraph on THE LAST REFUGE

“It's a thriller. It's current, and the excitement keeps going...” —The Daily Oklahoman on THE LAST REFUGE

“This exciting sequel to Power Down explores an all-too-plausible conflict...the plot sizzles with action, and the details have an authentic ring that put this thriller a cut above the pack.” —Publishers Weekly on COUP D'ÉTAT

“Will keep you up at night--first with the titillation of a great read, then with dread that Ben's plot might not be all that imaginary. A sumptuous dessert for a thriller reader.” —Brian Haig, author of The Capitol Game, on COUP D'ÉTAT

“Coes pumps new heat, blood, and flat-out action into a well-worn premise--terrorists are out to break America by attacking its energy resources--in his frighteningly plausible thriller debut.” —Publishers Weekly on POWER DOWN

“One of those rare, glue-in-your-seat books. Sit down, pick it up, and start reading. You aren't going anywhere for anything until you finish it.” —Bookreporter.com on POWER DOWN