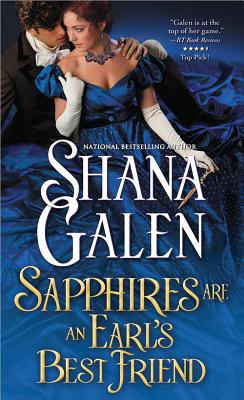 Lily Dawson, dubbed the Countess of Charm by the Prince Regent himself, plays the role of the courtesan flawlessly while her real purpose is spying in the service of the Crown. Her mission now is to seduce a duke to test his true loyalties. She'll do it, even though the man she really wants is Andrew Booth-Payne, Earl of Darlington-the duke's son.

Andrew is furious when he finds himself rivaling his father for Lily's attention. When he uncovers Lily's mission, Andrew is faced with impossible choices. It seems he is destined to betray either his family, his country, or the longings of his own heart...

The third book in a sparkling Regency romance trilogy from acclaimed author Shana Galen following a glittering trio of celebrated courtesans whose fortunes depend on the ton believing the rumors about their mysterious lives.

Jewels of a Ton Trilogy:
When You Give a Duke a Diamond (Book 1)
If You Give a Rake a Ruby (Book 2)
Sapphires Are an Earl's Best Friend (Book 3)

Praise for Shana Galen:
"Full of daring and danger, this Regency romance sizzles with sexual tension...and brims with subtle humor."-Long and Short Reviews
"Sensual and sexy."-Publishers Weekly
"A thrilling ride, filled with mystery, intrigue, and romance...leaves this reader breathless with anticipation."-Fresh Fiction