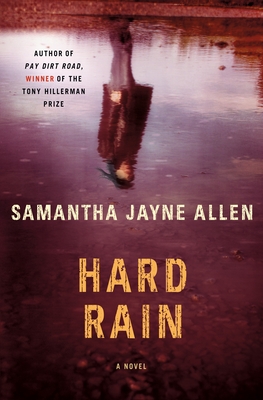 This is book number 2 in the Annie McIntyre Mysteries series.

In shock and found clinging to a tree branch, Bethany Richter is pulled from thrashing floodwaters that have decimated the town of Garnett, Texas and killed a dozen others.

Six months after solving the murder of a local waitress, Annie McIntyre is working as an apprentice P.I. when she's handed her first solo case: uncover the identity of the man who rescued Bethany before he was swept downriver.

When Annie's search turns up a different victim—shot dead, not drowned—Annie questions if the hero they seek is actually a killer.

Flexing her new skills while relying on the wisdom of her eccentric, ex-cop grandfather, the case leads Annie into a web of drug dealers, preachers, and wayward drifters trying to make sense of life after a disaster. Annie's own convictions are put to the ultimate test as long-held secrets, corruption, and violence are exposed like the ruin that lies beneath receding waters.

SAMANTHA JAYNE ALLEN is the author of the Annie McIntyre Mysteries. She has an MFA in fiction from Texas State University, and her writing has been published in Ellery Queen’s Mystery Magazine, The Common, and Electric Literature. Raised in small towns in Texas and California, she now lives with her husband and daughter in Atlanta.

"Wondrous....Allen proves herself as adept as the likes of David Baldacci, Lisa Gardner, and Lisa Scottoline."
—The Providence Journal

"If you liked the realist grit of Mare of Easttown, you’ll savor this smart and layered tale from a new Georgia writer worth watching." —The Augusta Chronicle

"Intensity of plot and depth of characters lift Allen’s novel into the top tier of rural noir. And her prose, rich with the rendering of the Texas countryside, imbues Pay Dirt Road with literary merit. Impressive and intense, Pay Dirt Road exemplifies splendid crime fiction—indeed, any fiction—and establishes Allen as a gifted creator."
—Fredericksburg Free Lance-Star

"While Pay Dirt Road entertains, it also makes the reader think beyond the confines of the story. That’s what good books are supposed to do." —New York Journal of Books

"Allen’s prose lights up like a neon beer sign....The Central Texas setting rings true, not just in its gratifying buffet of kolaches, H-E-B tortillas, and Texas sheet cake, but in the turreted McMansions whose smiling bluebonnet photos hide a host of sins." —Texas Monthly

"A dark picture of hardscrabble Texas juiced by the heroine’s angst makes for a great debut. Here’s hoping for a follow-up." —Kirkus

"Rural noir has found a stunning new voice in Samantha Jayne Allen's Pay Dirt Road, a pitch-perfect literary mystery as beautiful and thrilling as a summer storm. Channeling Veronica Mars by way of Mare of Easttown, waitress Annie McIntyre investigates the murder of a girl everyone wants to forget in her hometown of Garnett, Texas. With its haunted setting and uncompromising voice, Allen's debut invokes the restless, melancholy backroads of the Lone Star State, ranking her with Kathleen Kent, Attica Locke, and the best of the new generation of Texas writers."
—Amy Gentry, Bestselling author of Good as Gone

"Fellow Georgia scribe, Samantha Jayne Allen, has written a brilliantly paced and breathless debut novel. Pay Dirt Road is a gorgeous blend of sweeping epic and small-town mystery. From the stark and hazy Texas backdrop to the sins of the past and secrets that come home to roost, the tension never lets up. This book will have your head spinning and your heart breaking. It’s hard to believe this is a debut novel. Pay Dirt Road is a perfect addition to the rural mystery genre."
—Brian Panowich, Award-winning author of Bull Mountain, Like Lions & Hard Cash Valley

“It's no mystery why Pay Dirt Road won the Tony Hillerman Prize for best debut novel: its heroine, Annie McIntyre, is smart and complex, the family and small-town dynamics are richly layered, and the evocative language drops you directly into the gritty Southwest. Samantha Jayne Allen is a writer to watch."
—Jess Lourey, Bestselling author of Unspeakable Things

"Samantha Allen has delivered a beauty of a debut novel with Pay Dirt Road. This is the best kind of literary thriller, every bit as compelling and hard-edged as we'd expect of a Tony Hillerman Prize winner, with real heart—and a scrapper of a heroine—at its core. Allen prowls this territory with the smarts and savvy of a seasoned veteran, and I look forward to seeing what this fine young writer does next."
—Ben Fountain, New York Times bestselling author of Billy Lynn's Long Halftime Walk