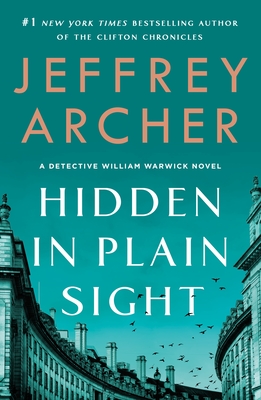 This is book number 2 in the William Warwick Novels series.

William Warwick has been promoted to detective sergeant, but his promotion means that he, along with the rest of his team, has been reassigned to the drug squad. They are immediately tasked with apprehending Assem Rashidi, a notorious drug dealer who operates his extensive network out of South London.

As the investigation progresses, William runs into enemies old and new: Adrian Heath, from his school days, now a street dealer who he convinces to turn informer, and financier Miles Faulkner, who makes a mistake that could finally see him put behind bars. Meanwhile, William and his fiancée, Beth, enjoy making preparations for their upcoming wedding, though an unpleasant surprise awaits them at the altar.

As William’s team closes the net around a criminal network like none they have ever faced before, he devises a trap they would never expect, one that is hidden in plain sight....

JEFFREY ARCHER was educated at Oxford University. He served five years as a Member of Parliament in the House of Commons and has served twenty-seven years as a Member of the House of Lords. Now published in 97 countries and more than 37 languages, all of his novels and short story collections—including Kane & Abel, Only Time Will Tell and This Was a Man—have been international bestsellers. Jeffrey is married with two sons and three grandchildren, and lives in London, Cambridge and Majorca.