Do No Harm: A Lucas Page Novel (Hardcover) 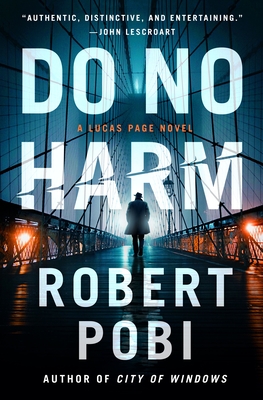 This is book number 3 in the Lucas Page series.

The 3rd instalment in Pobi's Lucas Page series is every bit as as good as the first two.

A lot of doctors have died in the medical community - disease, suicide, accident - but Page sees a pattern where no one else does. A pattern of homicide, and he has got to figure it out, and fast - his wife Erin looks to be the next target.

Pobi's writing is fantastic, his characters, the narrative, the plots. I have been waiting impatiently for this one and it was more than worth the wait.Definitely one of my top books of 2022. - Rebecca

In Robert Pobi's thriller Do No Harm, a series of suicides and accidental deaths in the medical community are actually well-disguised murders and only Lucas Page can see the pattern and discern the truth that no one else believes.

Lucas Page is a polymath, astrophysicist, professor, husband, father of five adopted children, bestselling author, and ex-FBI agent—emphasis on "ex." Severely wounded after being caught in an explosion, Page left the FBI behind and put his focus on the rebuilding the rest of his life. But Page is uniquely gifted in being able to recognize patterns that elude others, a skill that brings the F.B.I. knocking at his door again and again.

Lucas Page's wife Erin loses a friend, a gifted plastic surgeon, to suicide and Lucas begins to realize how many people Erin knew that have died in the past year, in freak accidents and now suicide. Intrigued despite himself, Page begins digging through obituaries and realizes that there's a pattern—a bad one. These deaths don't make sense unless the doctors are being murdered, the target of a particularly clever killer. This time, the FBI wants as little to do with Lucas as he does with them so he's left with only one option—ignore it and go back to his normal life. But then, the pattern reveals that the next victim is likely to be...Erin herself.

"A remarkable reading experience...the energy is relentless and the writing is luminous." —Booklist (starred review)

"Lucas’s utter lack of social skills is oddly endearing, his ability to cope with his physical limitations make him a compelling character, and Pobi is a quirky and talented writer."—Associated Press

"Page’s explanation for the nature of randomness is as exciting as the car chases, which is what’s so great about this book. With its perfectly judged pacing, zingy dialogue, and ingenious plot, Do No Harm will, in Page’s parlance, make your neurons sizzle. It’s statistically improbable for Robert Pobi to do so many things right, but, as this book proves, not impossible."—Air Mail

"This is a highly recommended series. If you are going to have a brilliant detective shine in your book, you had better be pretty brilliant yourself—and Robert Pobi obviously is."—Deadly Pleasures