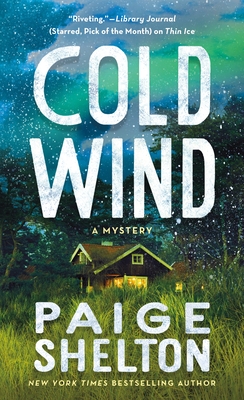 This is book number 2 in the Alaska Wild series.

Second in a new series set in Alaska from beloved cozy author Paige Shelton, Cold Wind will chill your bones.

Beth Rivers is still in Alaska. The unidentified man who kidnapped her in her home of St. Louis hasn’t been found yet, so she’s not ready to go back.

But as October comes to a close, Benedict is feeling more and more like her new home. Beth has been working on herself: She’s managed to get back to writing, and she’s enjoying these beautiful months between summer and winter in Alaska.

Then, everything in Benedict changes after a mudslide exposes a world that had been hidden for years. Two mud-covered, silent girls appear, and a secret trapper’s house is found in the woods. The biggest surprise, though, is a dead and frozen woman’s body in the trapper’s shed. No one knows who she is, but the man who runs the mercantile, Randy, seems to be in the middle of all the mysteries.

Unable to escape her journalistic roots, Beth is determined to answer the questions that keep arising: Are the mysterious girls and the frozen body connected? Can Randy possibly be involved? And—most importantly—can she solve this mystery before the cold wind sweeping over the town and the townspeople descends for good?

PAIGE SHELTON had a nomadic childhood, as her father's job as a football coach took her family to seven different towns before she was even twelve years old. After college at Drake University in Des Moines, Iowa, she moved to Salt Lake City. She thought she'd only stay a couple years, but instead she fell in love with the mountains and a great guy who became her husband. After many decades in Utah, she and her family moved to Arizona. She writes the Scottish Bookshop Mystery series and the Alaska Wild series. Her other series include the Farmers’ Market, Cooking School, and Dangerous Type mystery series.

"Appealing...Fans of light regional mysteries will be satisfied." —Publishers Weekly

"[With] rich character development and an inside look at an untamed environment where community determines survival. Fans of the first book will do well to follow up with this one." —Booklist

"[A] riveting story with an unusual setting and cast of characters. Fans of strong amateur sleuths will admire Beth's struggle to build a new future in a remote location. Readers of Vicki Delany's "Molly Smith" books, set in British Columbia, will also enjoy." —Library Journal (Starred, Pick of the Month)

"[With] murder, mayhem and heroics...[and] an intriguing cast of characters." —Anchorage Daily News

"A page-turner with an unusual location and a coda that provides more questions than answers." —Kirkus

"Readers are left wondering up to the last exciting page what the answers are, and will eagerly await the second in this new Alaska mysteries series from the author of the Scottish Bookshop mysteries." —Booklist

"Riveting. Suspenseful and intriguing . . . Shelton's fans are sure to enjoy this compelling departure from her typical writing style." —Shelf Awareness