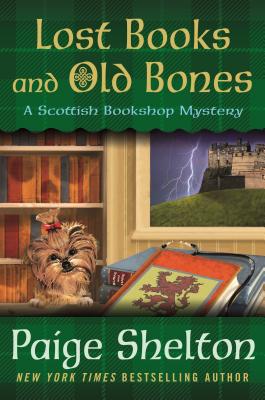 This is book number 3 in the A Scottish Bookshop Mystery series.

Delaney is settling into life in Edinburgh and the routine at The Cracked Spine when one of her new friends (a med school student), is murdered. Delaney realizes the crime has bizarre ties to the old Burke and Hare crimes. Once again Delaney finds herself in the middle of a murder investigation as she plays the role of bookseller and curator for the strange room of treasures at the bookstore. The cast of characters are what really make this series a winner. I just adore Delaney, her coworkers, and the family she's made for herself in Scotland. - John

Delaney Nichols, originally of Kansas but settling happily into her new life as a bookseller in Edinburgh, works at the Cracked Spine in the heart of town. The shop is a place filled with curiosities and surprises tucked into every shelf, and it’s Delaney’s job to research the rare tomes and obscure artifacts that people come to buy and sell. When her new friends, also students at the medical school, come to the shop to sell a collection of antique medical books, Delaney knows she’s stumbled across a rare and important find indeed. Her boss, Edwin MacAlister, agrees to buy the multivolume set, perhaps even to keep for his own collection.

But not long after the sale, one of Delaney’s new friends is found murdered in the alley behind the Cracked Spine, and she wonders if there is some nefarious connection between the origin of these books and the people whose hands they fell into. Delaney takes it upon herself to help bring the murderer to justice. During her investigation, Delaney she finds some old scalpels in the bookshop’s warehouse—she and discovers that they belonged to a long-dead doctor whose story and ties to the past crimes of Burke and Hare might be connected to the present-day murder. It’s all Delaney can do to race to solve this crime before time runs out and she ends up in a victim on the slab herself.

PAIGE SHELTON had a nomadic childhood, as her father's job as a football coach took her family to seven different towns before she was even twelve years old. After college at Drake University in Des Moines, Iowa, she moved to Salt Lake City. She thought she'd only stay a couple years, but instead she fell in love with the mountains and a great guy who became her husband. After many decades in Utah, she and her family moved to Arizona. She writes the Scottish Bookshop Mystery series, which begins with The Cracked Spine.

"A complex plot, a cast of amiable characters, an array of suspects and an enchanting Scottish setting combine to create a clever entry in a capital series, one that provides multiple pleasures, whether or not accompanied by a single malt."--Richmond Times-Dispatch on Lost Books and Old Bones

"Full of quirky characters and charming settings...Delaney must race to solve the crime before she's in danger!"--Woman's World