A Most Novel Revenge: An Amory Ames Mystery (Paperback) 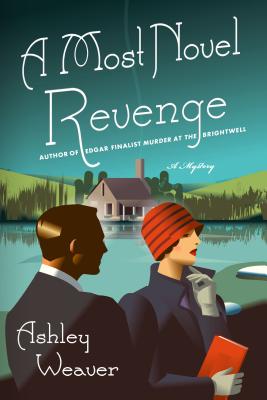 This is book number 3 in the An Amory Ames Mystery series.

Edgar Award-shortlisted author Ashley Weaver returns with A Most Novel Revenge, the charming next instalment in the delightful 1930s Amory Ames mystery series

“A pleasant reminder of Golden Age mysteries that keep you guessing until the denouement.” —Kirkus Reviews

“Well, darling, who do you suppose will turn up dead this time?”

With two murder investigations behind them and their marriage at last on steady ground, Amory and Milo Ames intend to winter quietly in Italy. The couple finds their plans derailed, however, when Amory receives an urgent summons to the English countryside from her cousin Laurel. At Lyonsgate, the country house of Laurel’s friend Reginald Lyons, Amory and Milo are surprised to discover an eccentric and distinguished group of guests have also been invited, led by the notorious socialite Isobel Van Allen.

After years of social exile, Isobel has returned to England to write a sequel to her scandalous first book, the thinly fictionalized account of a high society murder at the very country house to which the Ameses have been called. Her second incriminating volume, she warns the house’s occupants—all of whom were present when one of their companions was killed years ago—will tell everything that really happened that fateful night. But some secrets are meant to stay buried, and when a desperate person turns to murder, it’s up to Amory and Milo to sort through a web of scandal and lies to uncover the truth, and the identity of a killer.

Also out now in the Amory Ames mysteries: Murder at the Brightwell and Death Wears a Mask

Praise for A Most Novel Revenge

"A pleasant reminder of golden-Age mysteries that keep you guessing until the denouement." —Kirkus Reviews

Praise for the Amory Ames Mysteries

“Ashley Weaver takes Golden Age mystery elements and makes them her own with
charm and wit.” —Fresh Fiction

“Fans with fond memories of Georgette Heyer’s mysteries set in the same period will be delighted with the gallery of suspects and the edgy romance.” —Kirkus Reviews

“Sure to appeal to Agatha Christie devotees.” —Booklist

“It's all very Downton Abbey.... [Weaver] channels the ambience and spirit of British society during the post? World War I years.” —Associated Press

“With a profound nod to the Golden Age of the British whodunit, Weaver creates a classic mystery, complete with a fashionable setting, a cast of upper-crust Brits, and witty prose.” —Richmond Times-Dispatch